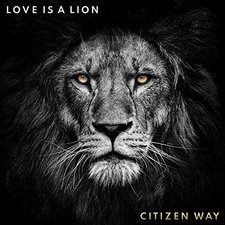 Citizen Way
Love Is A Lion


While there probably isn't a rule etched in stone or listed in a handbook somewhere saying as much, most musicians, whether they are consciously aware of it or not, tend to order the songs on a given project so that the first few cuts are among the strongest. This is certainly the case with Love is a Lion, the third effort from the Chicago-area trio, Citizen Way. With a pop sensibility as sweeping as it is melodic, it's hard to imagine a more rousing album (or concert) opener than "The Lord's Prayer." Just as impressive is "Love Has Won," a loping, folk-tinged anthem of hope to the lonely and hurting.

Unfortunately, like so many of their contemporaries, the CW collective spends the next seven slots in the running order churning out one mostly nondescript, made-for-radio pop/worship number after another. To the group's credit, the title track does rise ever so slightly above the average value thanks to its infectiously terse tribal rhythms. And "Hallowed Be Thy Name" is likewise blessed with a modestly engaging light funk vibe. By and large, though, the second section of the record is saddled with a lethargy and repetition that ultimately serve to bring its encouraging opening momentum to a virtual halt.

Thankfully, the proverbial ship is righted, for the most part, by the two closing compositions. The beautiful piano-based ballad, "Be Still," takes the best aspects of Christian pop over the past four-plus decades and distills them down into a single four-minute piece that is as evocative as it is timeless. And the decidedly old school lyrics found on the joyous Bart Millard-assisted gospel rave-up, "WaveWalker," ("I'm a wavewalker/ dancing on water/ When the devil tried to shake me/ I just pray harder") are just the sort of soulful infusion that inspirational pop radio needs here in the latter half of 2019.

Top 40 listeners will likely enjoy the album from start to finish given the high quality of the opening and closing song pairs together with the fact that the remainder of the release is roughly on par with the bulk of what they hear on radio. For everyone else, though, the best approach would be to skip the middle portion of the record - aside from perhaps "Hallowed Be Thy Name" and the title cut - and focus their attention on the tracks at either end.