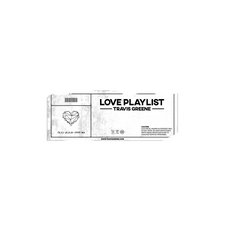 
In the love revolution that was the 1960's, the famous Beatles song summed up its core message... "All you need is love, love's all you need." While The Beatles may have had a different vision of "love" from the Biblical view, there's no question that the year 2020 has reignited the need to show love to a world in chaos and turmoil. Entering the fray is the self-described "pastor who worships," Travis Greene, who promptly released a playlist of songs titled Love Playlist. The collection consists of all previously released material, with each song focusing on the central theme of God's love.

Greene needs no introduction to the contemporary gospel scene, as he's had four #1 hits on gospel radio up to this point. His immense vocal dynamics combined with sincere, passionate worship-leading make it easy to see why he's quickly becoming a household name in Christian music. The sound presented here could be described as "Gospel meets contemporary worship," striking a balance between the intricate chords and huge choirs that make gospel music beloved, while still keeping the songs accessible enough for the average listener to sing along with on the first listen. The songs are all performed in a live worship setting, which is a preferable venue for Greene, as it allows him to spontaneously and energetically guide the listener through each song, much like you'd hear from other gospel music staple Kirk Franklin. Greene lights up the room with charisma, and the simmering energy of songs such as "Be Still" and "While I'm Waiting" is infectious and make it near impossible to remain still while listening. His vocal talent gets an ample chance to shine throughout, and shine it does, though some overly strained vocals make an appearance in the schmaltzy ballad "Loved By You."

The playlist begins with two versions of last year's hit single "Good and Loved," the first featuring Steffany Gretzinger of Bethel fame, and the second in a more coffee-house style with singer DOE (formerly of gospel group foreverJONES). I found the opening version to be more effective mostly due to Gretzinger's distinct, sold-out worship delivery. That being said, I've never been a fan of hearing the same song back to back, and beginning the playlist this way does detract a bit from its overall flow. Another thing that deserves mentioning is that this song, along with "Be Still" are mainly written from God's perspective, and while many songs in the past have used this lyrical slant to provide personal edification, it's a bit off-putting in a corporate worship setting, and I was simply confused as to which direction I was singing. Lyrics like "One thing's for sure/I am your Lord" and "I'm in control/I am still God," felt jarring coming out of my mouth, and made for a somewhat awkward worship experience. The aforementioned "While I'm Waiting" is a standout track with its carefree-vibe and themes based on Isaiah 40:31, leading into an ear-catching bridge sung by guest vocalist Chandler Moore, that takes the song to soaring heights, "I will run and I will not be weary/I will walk and I will not faint/I will rise up on wings as eagles/I believe I will trust in you."

If you've never been introduced to the enthusiastic sound of Travis Greene, this little playlist will give you a good sample of what he's all about. In this time of crisis and trouble, it's a timely reminder of the truth of God's love, and while some new tunes would have perhaps made a bigger impact, this collection of love songs is worth your attention--just be sure to keep track of who's singing to whom.