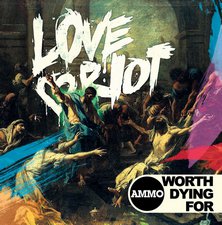 Worth Dying For
Love Riot

It's been about a year since we've heard from Worth Dying For. Last April, the five-piece worship band released a small sampling of what was to come in the future. Well, the future has arrived and we now have the full-length album, titled Love Riot. So, after a few independent releases over the past half decade, we kind of know what to expect with WDF: A harder side of worship that's done very well. So, what's to be said of this release?

Love Riot opens with "Destroy," which is more of a sermon than a song, and it sets up the theme that will follow throughout the entire album. Up next is "Savior," a song that I would classify as typical WDF which carries an industrial rock sound. Thousand Foot Krutch's own Trevor McNevan collaborates on "Through Your Eyes" and the end result is hard rock worship done well. Closing out the first half of the album is "You're Alive," full of hardcore screams; "Stir It Up," which is mediocre at best; and "Higher," full of powerful lyrics like "Nails couldn't keep you down, the grave couldn't keep you in, Hell couldn't keep you out. You reign, You reign."

At this point in the album, the sound changes; there is a noticeable difference between the first seven songs and the remaining tracks. After starting out with a solid rock feel, Love Riot continues with slower and softer worship. "Power Of Your Love" delivers that sound beautifully with hard driven piano keys blending with Christy's vocal talents. "My Glorious" and "Closer" take the album to its pinnacle with the lightest worship on the spectrum, and showcase heartfelt lyrics such as "I don't want to walk away from this place, unless I know I've given You all of me." "Never Look Back" and "Take Me Away" are decent listens, but offer nothing too engaging.

Love Riot as a whole speaks on the profound truth of having an eternal perspective, the greatness of Jesus' name, and the desire to be closer to Him daily, all amid a backdrop of contemporary and hard rock worship. The techno and industrial sounds blend nicely, though they are more of an acquired taste. If you like your worship a little more edgy, then this release is right up your alley.