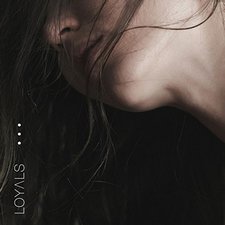 
Currently residing in Nashville Tennessee, band Loyals first met as teens and have been friends ever since. This trio has been together for nearly a decade, and self-released an EP titled Raise the Stars under the moniker Skyhook in 2012. That six-song EP took a more rock approach, but after signing with label Tooth & Nail, they have shifted musical direction to a more pop/R&B sound with this full-length self-titled debut. What we get here are synth driven, R&B tinged, pop songs some memorable and others not so much.

Noteworthy songs, musically, are the trio of "Hold On," "Alright" and "Gone." The catchiest and most radio ready of the album is "Hold On," which has a synth heavy, R&B drenched sound, featuring some tasty falsetto vocals. The topic of the song would seem to be a girl, with the singer lamenting, "I think I made a mess of your love," and imploring his flame to "hold on." It feels like it would be right at home beside other songs currently on the mainstream charts, and it would come at no surprise if it ended up there. Song "Gone" features a driving beat and soaring harmonies in the chorus, displaying touches of their prior band's rock sonics. "Skyline" finds the singer kicking himself for moving too quickly with lines like, "I can tell you think that I'm crazy/I would too if I were you, but believe me/This isn't typical/This is magical/I want you to know/I maybe said too much/But your voice/that touch/This night/Got me higher than the sky/higher than the skyline." This song takes a more straightforward pop sound with mid-tempo pacing. Slow song "IDC" stands out for keeping vocals in the back of the mix with high levels of reverb. Unfortunately, at over five minutes in runtime without variation, it drags in the last few minutes, holding it back from potential highlight status.

Another gentle critique of the album overall would be that some impressionable listeners may take the ambiguously stated lyric from the aforementioned song "Skyline," "your voice/that touch/this night/got me higher than the sky" to depict a physical relationship out of control. It's an isolated line among the lyrics available at the time of this review, but worth noting. Lastly, the lyrics of uber-groovy track "Alright" could be interpreted as a bitter kiss-off to a former relationship stating, "I guess I'll light my own way/come as you may/long as you know I don't need nobody/I've been doin'/Alright/up until the early morning twilight/doing only what I wanna all night." That's a shame because it's one of two excellent sounding songs with its strong backbeat and the falsetto guitar breakdown in the bridge. These last two songs, ("Skyline" and "Alright") demonstrate the biggest issue with an album (somewhat) directed at the Christian music market, and that's the fact that there are zero mentions of God within the context of human relationships. Even layered allusions to this divine relationship forming the basis for earthly love are noticeably absent. This coupled with music that does little to differentiate itself from the rest of the mainstream pop genre are what hold it back keeping it solidly among the middle of the pack.

In fact, most if not all songs on the album seem to be directed toward love relationships (not to mention the cover artwork), and although this is not necessarily a bad thing, it feels more like the label's main plan is to push these songs toward the mainstream music market. Songs "Hold On" and "Alright" could certainly make some impact there, but overall, there isn't much else that stands out above a crowded pop music scene. Without sounding exactly like any of them, Loyals is recommended for fans of pop artists One Direction, Justin Beiber, and up-and-coming guy groups, Why Don't We and PrettyMuch.

Sometimes, when an independent band signs to a major label, the band makes some changes in light of its new trajectory and audience. A Feast For Kings became XXI, No Tagbacks became House of Heroes, and, more recently, Skyhook became Loyals. The former pop rock worship band has joined Tooth & Nail Records and made a shift toward the pop alternative scene with their self-titled debut. Loyals have written some seriously catchy tunes for this album, with "Mind Up," "Bail Out," "Skyline," "Heartstopper," and "Alright" leading the pack as far as album highlights. The closest comparisons I can come up with are bands like Walk the Moon and Smallpools, but their Nashville roots also show up occasionally with the subtlest hint of country music, such as the vocal melody in the chorus of "Skyline." Melodically, it almost sounds like something you'd get from Lady Antebellum or Rascal Flatts - but don't let that turn you off, because it actually sounds good here. Loyals' debut is a solid album with great melodies and a terrific mix of alternative, indie pop, and pop music that will stay in heavy rotation for the foreseeable future. - Review date: 2/10/18, written by Scott Fryberger