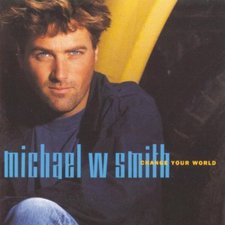 In the 90's, Michael W. Smith was arguably at the very peak of his career. While achieving enormous success in the 80's, it was the 90's that he was arguably at his most popular. And of all his work in the 90's, nothing spells the musical talent of Smith like his 1992 album, Change Your World.

Now, for those who can't stand the music of the 90's, the sound will probably grate your ears; this music is absolutely drenched with the sound of the 90's (and the early 90's at that). Because of that, it takes a listen or two to really get into this album today. But after clearing that hurdle, this album is nothing but the musical genius of Michael W. Smith. Yes, it is true that it is sometimes very painful to listen to 90's music, but this is 90's music at its best. As for the lyrics, well, they are typical MWS (in other words, quite excellent). Mostly written by Smith's longtime friend Wayne Kirkpatrick, they deal with typical "Smithian" issues. "Picture Perfect" is about the pressure of conforming, "Color Blind" tackles embracing diversity, "Cross of Gold" engages causal Christians, and so on. And as for the tracks individually, one of the things that really elevates this album is the fact that each sounds different from one another. Again, this can be attributed to Smith's masterful music-writing abilities.

The biggest highlights on the album are the previously mentioned "Cross of Gold," his mega-hit "I Will Be Here For You," his duet with Amy Grant in "Somewhere Somehow," and the updated version (well, at least then, it was an update) of his definitive classic "Friends," which is probably the best version of the song that is out there. But, of course, then there is that awkward collaboration with TobyMac on "I Wanna Tell The World." I seriously wince every time I hear that track open, without warning, with Toby saying, "Yo, Smitty, it's time to get witty, so hitty-hitty-hitty-hitty-hit me!" Don't get me wrong, the music is fine and Smith is fine on it, but Toby just doesn't work here. But, considering his other work for the year 1992 (specifically dc Talk's milestone Free at Last), that is easily forgiven. But this is the only real musical hiccup on an album that is otherwise great.

In case you can't tell, I really like this album. It is probably my personal favorite album in Smith's career up to his 1998 release Live the Life (although MWS2 comes close). But for the reasons stated above, this is far from "picture perfect." If you can't stand the 90's, this will be a tough album to listen to (although I still maintain that all you need to do is listen to it a couple of times and then you will really like it). But probably no other album in Smith's career truly defines the depth of Smith's musicianship than this one; he took what was popular at the time and molded it into what I can only describe as truly great music. Not even The Big Picture, where Smith attempts to do the same thing with 80's music, can put a finger to it. While in The Big Picture Smith merely uses the music, in Change Your World, he actually creates the music. And especially now when the CCM market is being filled to the brim with "worship music" (as if all other music created in the name of God can't qualify as such), that is a very valuable lesson.