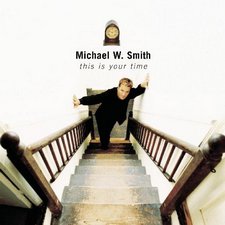 Michael W. Smith
This Is Your Time

Michael W. Smith wrote 26 new songs for his 1998 release Live The Life, but only used 14 of them (12 on the actual album and two more as B-sides to the two lead singles). So does a megastar Christian musician do with the other 12? Well, naturally, include them on his next release!

Released less than a year after Live The Life, This Is Your Time has a distinctly different sound from his previous album despite all the songs being written at the same time. Overall, This Is Your Time is more whimsical, optimistic, and... Celtic. Yes, there are a lot of bagpipes on this album, or at least it feels like it. After all, the opening track is an instrumental very prominently featuring the instrument. In actuality, only two of the songs feature the bagpipes, but because the instrument is the very first thing we hear, it feels like it was used more frequently. And, of course, it is prominently featured in the most famous song from this album. As far as the rest of the music, think of your more basic piano/guitar pop, complete with drum loops. It doesn't sound much like the type of music you think about when you think about Smith, especially after albums like I'll Lead You Home and Live The Life, but true to form, he does give all the music the usual Smithian flavor. Still, knowing the immense skill Smith has for instrumentation, it feels a bit too simple for one of his albums. That's not to say it is not good; it is great, but just simple.

As for the individual songs, needless to say, the big standout is the title track, written in memory of Cassie Bernall and the victims of the Columbine shooting. Regardless of whether or not the encounter between Bernall and the gunmen actually happened, the song is still a beautiful, inspiring, and optimistic tribute to her and all the victims of the tragedy, and possibly the most moving song Smith has ever created. And that theme of optimism, as well as a sense of nostalgia, is thick throughout this whole album. This makes the album a good pick-me-up to listen to after a long hard day, and, of course, any other occasion as well. Other songs that deserve mention is the fun little song about slowing down for life, called "Hey, You - It's Me;" the similarly themed retrospective tracks "Anna" (written for his daughter) and "Everybody Free;" and possibly Smith's first song to ever feature voice distortions in "Reach Out To Me." And he even has a funky and otherwise very whimsical track in "I'm Gone." Smith's instrumental reprise of "This Is Your Time" is as gorgeous as any instrumental he has ever written.

It surprised me how much I liked this album, considering that this was basically an album full of the rejects of Live The Life. But it does not feel like that at all. This is a very good, very entertaining, and very inspiring album. It's certainly not one of Smith's best, but nevertheless, it's very good. However, you just can't shake the feeling that this album was created as a vehicle for the title track. Its presence is felt throughout the whole album (but I'm sure there is some intention in that). That is certainly not a bad thing, but it is worth noting. All in all, This Is Your Time is a very heartfelt, optimistic, and entertaining project that is definitely worth a listen.