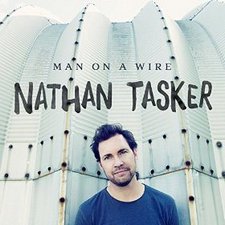 Nathan Tasker
Man On A Wire

When comparing Australian singer/songwriter Nathan Tasker's album Home to his latest, Man on a Wire, you can tell that something is different. This change is undoubtedly linked to the terrible tragedies that Tasker and his wife experienced with the loss of their son, daughter, and father soon after the release of Home in 2011. Romans 5:3-4 explains that when we go through a period of suffering it builds endurance, character, and hope. The songwriting on Man on a Wire provides tangible evidence of this growth in Tasker's life. Though he had a couple solid lyrical moments on Home, with songs like "Eternity" and "Find My Way Home," for the most part he played it safe with radio friendly lyrics. This time around, Tasker digs much deeper into the human condition, successfully accomplishing his goal to create an honest and authentic album.

With three upbeat tracks, five slower songs and three in between, the energy on Man on a Wire can get a bit low at times, but for the most part, Tasker keeps the listener engaged with solid musicianship, strong lyricism, and clear but interesting vocal prowess. The only time that a listener might get distracted from the music is at the end of the album when it trails off with three mellow tunes in a row. Individually, each of these three tracks are solid, but because of the over-abundance of slower songs, it is only with repeated listens that most people will be able to really enjoy them.

The acoustic sound on the slower songs possesses a quiet ambiance and story-like lyrics. According to Tasker, "Sowing Tears" was one of the first songs he wrote after his losses. He based the intimate song on Psalm 126:5 which promises: "Those who sow in tears shall reap with shouts of joy!" Even more personal is the album highlight "Nowhere to be Found," where Tasker demands answers from God: "Am I not shouting loud enough? / Is there more than the top of my lungs? / I used to feel your love / where has it gone?" One thing that is atypical for CCM is that there is no resolution within the song. Instead, he leaves that up to the other songs on the album.

The three upbeat numbers all feature bright acoustic guitars with some keys, electric guitars, and synths thrown in for good measure. These songs all have a common thread of being acoustically based, but there is a good amount of variation in the rest of the instrumentation to give each song a distinct characteristic. The title track, "Man on a Wire," has a late 90's rock sound in the verses, "Closer" has a CCM vibe, and "No Good Reason" utilizes a Hammond organ. The strongest of these is the title track which is undeniably catchy with its lively drumming and infectious chorus. The singer/songwriter's warm but confident vocals really shine here as he sings about keeping his eyes fixed on Jesus. The mid-tempo songs, "Rise" and "Whole World," may not have the same energy as their upbeat counterparts, but their musically playful palette and optimistic lyrics help carry the middle of the album (even though "Whole World" is just a bit too cheesy).

Over the years, Australian artists have made big influences on the Christian music industry here in the States. Newsboys, Hillsong, Rebecca St. James, and more recently For King & Country are some notable examples. If Nathan Tasker keeps putting out albums of this caliber, it might only be a matter of time before he too becomes a CCM household name.