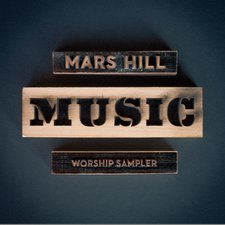 Most socially active Christians today are familiar with Mars Hill Church in some capacity, whether it's from following Pastor Mark Driscoll on Twitter or from listening to some of the musicians and bands associated with the church's network of locations. Mars Hill lists several artists under the music page of its website, and it started to make a name for itself in Christian music in 2012. Late in the year, Mars Hill Music signed an exclusive partnership and distribution deal with Tooth & Nail Records (though most likely going through the BEC Recordings name). To get their new fanbase acquainted with the Mars Hill artists and music, BEC is releasing the Mars Hill Worship Sampler.

This sampler contains fourteen tracks (and a great deal of hymns) from ten different Mars Hill recording artists. You just might be familiar with a couple of the artists on the tracklist, too. Dustin Kensrue brought his new worship group The Modern Post into the public eye last year with an EP called Grace Alone, while King's Kaleidoscope gave us one of 2012's best Christmas offerings, and Ghost Ship played on the bonus track of Levi the Poet's Monologues (although an attendant of Mars Hill Church's Albuquerque branch, Levi is not part of the Mars Hill Music family). These artists all provide some of the best tracks of the entire sampler (although the second of Ghost Ship's songs, "One God," isn't quite as impressive as their take on "Just As I Am"). These artists churn out some solid electronic-influenced indie and alternative that almost guarantees terrific future releases.

The rest of the artists make up a mixture of highlights and disappointments. Though nothing here is really terrible, some of it just doesn't measure up to the others. One of the new goodies comes from Citizens, which just so happens to be the first Mars Hill artist to release an album under BEC in March. While their opener for the sampler, "Nothing But the Blood," makes for an underwhelming opening and rather unoriginal take on the song, they made me a believer with "In Tenderness." It makes me wonder just how their debut will turn out. The same goes for Ghost Ship, who has a hit with the Hot Hot Heat-esque "Just As I Am," but a just-okay track in "One God." Kenosis, on the other hand, offers two strong tracks. "What Wondrous Love Is This?" is dripping with influence from The Black Keys, Ravenhill, Sean Michel, and the like, while they close the sampler with "Depth of Mercy," which is a lot slower and sounds more indie pop, the likes of Sleeping At Last. The screaming that comes in near the end is a bit odd (and definitely unexpected), but part of me likes it. King's Kaleidoscope and Kin also make good one-time impressions with the indie alternative versions of "Come Thou Fount" and "All Creatures," respectively.

Unfortunately, as I said, not everything here is great. About half the tracklist falls somewhere between "okay" and "meh"; none of the songs are awful, by any means, they just aren't the sampler's strong points. The Sing Team performs "Oh! Great Is Our God!" and "What A Friend We Have In Jesus" in the style of a campfire singalong (with a little southern gospel flavor in the latter). Now, while I love the idea, I think something like that works best in certain settings (like at a campfire, or in the midst of a worship service, perhaps), and I'd be hard-pressed to actually buy it and listen to it. Joe Day's "Death To Life" sounds like a watered-down Jeremy Camp, sounding rather bland and offering nothing memorable. Red Letter's "My God, My Father" fairs a little better, with some light indie music and some interesting guitar work. The vocals are on the dry side, and it's not amongst the sampler's strongest tracks, but there's potential for at least an enjoyable full-length album. Right before Kenosis takes us out on a strong note, we get an interesting song choice from Ramshackle Orchestra, in their Irish folk rendition of "Lion of Judah." When I think about not liking the song, I feel like it's less about the song's quality and more about how the song doesn't really fit with the rest. You have indie, rock, and alternative bands all over, and then out of nowhere comes an Irish folk song. In the context of more music like that, it might sound a lot better.

With this sampler, Mars Hill is essentially saying "Okay, we're with BEC now, so here's what we've got to offer!" As you see, this is partially thrilling, and partially a letdown. From what I've heard of the Mars Hill Worship Sampler, I can safely say I'm excited to hear full-length releases from Citizens, Ghost Ship, The Modern Post, Kenosis, King's Kaleidoscope, and Kin. The rest will have to take strides to impress this reviewer. However, in the end, all that we do, really, is all about worshipping and bringing glory to Jesus, and it's clear that all of these artists' have hearts for that. This partnership is looking to be a good one; check out this sampler and meet a potential new favorite worship band.

(Note: some of these artists still have albums and EPs available for full stream and purchase at the Mars Hill Bandcamp page if you're interested in hearing even more!)