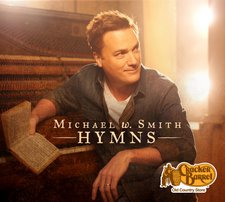 For 31 years, Michael W. Smith has been a powerhouse name in the realm of Christian music, with his 20-plus albums combining to have sold over 15 million copies. And he has done all of this comfortably within the confines of Provident's Reunion Records. But things are changing for Smith now in 2014. Much like how his friend Steven Curtis Chapman left his home label Sparrow Records after 25-years in favor of Reunion, Smitty is on his way to Sparrow (a transaction that will doubtlessly cause fans of both great musicians to humorously refer to as a "trade"). But the similarities don't stop there. Chapman preceded the release of his first album with his new label with a heartfelt album of hymn renditions released through Cracker Barrel Old Country Stores entitled Deep Roots. Now, with the advent of his first Sparrow album coming in May, Smitty is turning to Cracker Barrel for his own take on timeless hymns for his first original non-instrumental work in nearly four years, simply titled Hymns.

Throughout Smitty's career, his aptitude for composing has been phenomenal, from the crisp production of his studio albums to the impressive musicianship of his instrumentals. But on Hymns, Smitty takes a far more stripped back and traditional approach, much more raw in production and sparse in instrumentation and effects. The result is 15 hymn renditions (ranging in age from 1707's "When I Survey" to 1989's "Wonderful Merciful Savior") that emit a timeless quality and sound that can be appreciated by any generation. Often supported by gospel choirs, Smith's familiar vocals are as warm as ever and seem to age as wonderfully as a fine wine.

Indeed, Smith's renditions of these hymns are very heartfelt and beautiful in their intentional simplicity and straightforwardness, but many listeners will undoubtedly be disappointed by what this album is not. In today's world of Christian music, we are used to artists taking hymns and flexing their creative muscles in taking the familiar words and rhythms and putting their own spin on it, such as Jars of Clay's Redemption Songs, Leigh Nash's Hymns and Sacred Songs, or even Steven Curtis Chapman's aforementioned Deep Roots. So when many listeners (indeed, including myself) hear that Michael W. Smith is putting out a hymns album, they become excited to hear how he manages to fill hymns with creative expression and personal touches. But when they instead hear an album full of renditions that could sound identical to renditions from the 19th century, they are bound to be disappointed.

For what it is, Hymns is a wonderful album. Traditional in approach, timeless in sound, and heartfelt in execution, there is nary a flaw in the work Smith has given us. But so many listeners will still be left wanting oh-so-much more from such an accomplished artist as Smith. Perhaps it is unfair to want more than what was ever intended (it certainly speaks to the tendency towards greediness that modern music listeners often exhibit), since clearly Hymns was never intended to be such an album as artistically expressive as Redemption Songs or full of personal touches like Deep Roots, but the lack of ambition in an album like Hymns (especially coming from the artist with a history of ambitious projects like Live The Life, I'll Lead You Home, or even Worship) makes it difficult to recommend over such projects. Nevertheless, Smith saw out his vision to a "T," and that itself is worthy of praise.