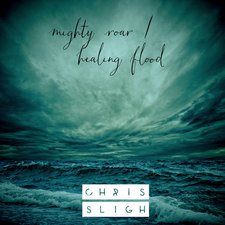 
It has been ten years since the sixth season of American Idol, where the world was introduced to the impressive vocals of Chris Sligh, and three years since Sligh's latest release, the triple-album This is Life. With his recording career momentarily taking a backseat to his duties as a worship leader, Mighty Roar / Healing Flood represents Sligh's return to the spotlight of the Christian Music scene. And when it comes down to it, I would argue it is a notable return.

The general idea behind Mighty Roar / Healing Flood is similar to many worship artists in the Christian market today; make an original, creative, accessible project. In this case, Sligh drew inspiration from the synth-saturated sounds of the 80's and modern EDM to form his musical backdrop, not unlike the recent music of Hillsong Young & Free. But these sonic incorporations are more than simply a thin veil over an ordinary modern contemporary worship album, even though "an ordinary modern contemporary worship album" will be the first impression of many listeners (admittedly, as was mine). Whether intentional or not, Mighty Roar has an undeniably liturgical structure, and with great portions being sung from a first-person perspective, you get the feeling that this album is pretty personal (especially in light of Sligh's blog post he shared with us at JFH last December).

The start of this album is a bit inauspicious, however. In both "Freedom Song" and "Stripes," the combination of the contemporary structure and synth melodies makes it feel slightly awkward and even a bit forced, as if Sligh wanted to try to disguise ordinariness of the songs by trying to make them sound "hip." "Backwards" quickly corrects this feeling, and while it's still fairly ordinary from a worship song perspective, Sligh begins to enter his element, and doesn't really leave it for the rest of the album. But "More of You" is the true highlight here, and ironically, the thing that makes the song so worthwhile is not Sligh's lovely vocals, but the dramatic use of autotune to distort them. The entire song broods sonically, all the while making proclamations like, "We have not forgotten what you've done, or the mighty works held in your hand." The tone of the rest of the album is set by "More of You," and both "Here" and "Worthy" follow so naturally that they almost feel like three movements of the same symphony. Later highlights "All to You," and "Mystery of Love" also help maintain that momentum and anchor the back-half of the album.

This album is an excellent example of something in which the sum is greater than the individual parts. Mighty Roar / Healing Flood is full of songs that, taken on their own, remind one too much of the familiar praise-and-worship lyrics, the worship anthem structures, and the mediocre albums so often associated with CCM in the recent past. But this is where the art of structure, theme, and experience become so critical (and having Sligh's voice certainly doesn't hurt). This is a great "sit-down-and-listen-though" album, and in spite of a hiccup or two, is as cohesive as anyone could want. I don't expect many people to fall in love on their first listen, but they very-well might on their third, fourth, or fifth.