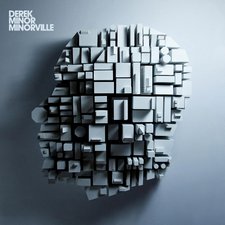 Derek Minor (formerly known as PRo) changed his stage name last year and has now released the first LP under his new moniker. The 116 alum has a lot to say in his newest album, Minorville, but not much of it carries a hopeful message. The record takes a serious look at the sad state of affairs that is the current United States of America. Some will argue that this is the best PRo/Derek Minor album to date, but others may be turned off by the darker tones brought to mind in his raps. No matter what side of the fence you may fall, Derek Minor brings some important truths to light in 2013.

"Lost in Minorville" kicks the album off with what sounds like the opening to a family sitcom. It's purposely outlandish and an entertaining listen as Derek raps about the fictional town of Minorville and its picture perfect setting. The likely best cut hits right out of the gate with "IGWT," which stand for "In God We Trust." The track features Thi'sl, but unfortunately his deep voice is only heard in the chorus and he doesn't rap at all. The lyrics encompass what Minorville is about as a whole and the track ends with a [Jimi] Hendrix-like finale of the national anthem. "Gimmie" looks at society's me-first complex and the "need" to have everything. One of the more interesting songs on the record is "Hot Air Balloon." The lyrics focus on the way that we tend to let our problems manifest on others and the damage that behavior can do. It's also a reminder to think of what another person who treats you wrong may be going through in their own life. "Making Me More" has a unique sound and stands out due to the organ, guitar, and vocals of Mel Washington.

Up and comer Dee-1, as well as Lecrae, join forces with Derek for what's probably the most powerful and necessary track on the album. "Dear Mr. Christian" takes the view of three different lost people. The lyrics in the verses give the backstory of each lost person while the chorus is a message to the judgmental Christians of the world. One by one, Derek Minor, Dee-1, and then Lecrae lay down believable stories that question the condemnatory nature of so many. The chorus brings it home as Derek raps, "Dear Mr. Christian, I know you're on a mission; I know you say the answer to my problem is religion. I know I'm supposed to change the way I live and stop sinnin', but I'd appreciate if you'd take some time to listen." Another seriously powerful message is found in "Homecoming." Here we find the story of a homecoming queen and Christian girl whose life takes a severe change for the worse. The girl gets pregnant outside of marriage and the father-to-be leaves her for a college scholarship. The girl's friend later gets her hooked on meth and she eventually loses her child because of her habits. The background dialogue features a couple of beeps to stress the gravity of the situation, but there is absolutely no indication that anything but a beep was used. The girl finally finds God again, apologizes to her family and daughter, and is welcomed home. The title has to do with the girl's homecoming with Christ and features a nice vocal section by Isaac Carree to close it out.

Overall, Minorville is a slight step below PRo's Dying to Live. The record contains some important messages that are definitely powerful in nature. From a musical standpoint, it features some R&B vibes, from songs like "We Gone Make It," "Love You Better" and "Sweet Dreams," that haven't been found as much on past works. While Minorville is an important album that people should undoubtedly listen to, Dying to Live's lyrical cleverness, and better sound in general, make it tough to top. Derek Minor has stepped up to the plate and proven he's not a rapper to be taken lightly. An unashamed and Christ-centered focus coupled with hard to swallow, but essential lyrics, make Minorville a can't-miss.