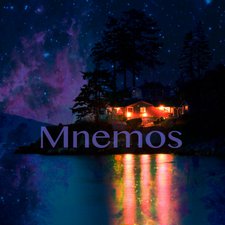 Six years ago, the then alternative rock group Falling Up released their remix project, Exit Lights, after just two albums. Although Mnemos, the band's newest project, is labeled as a remix EP, it doesn't have much in common with Exit Lights or an EP for that matter (Mnemos consists of seven tracks and another three bonus ones). The band offered the EP exclusively on Groupees.com at a pay-what-you-want deal to help the charity "Feed Them With Music."

Exit Lights may have drawn from the first two Falling Up albums, but the remix material on Mnemos only comes from Your Sparkling Death Cometh. However, whereas Falling Up clearly put a lot of effort into Exit Lights, Mnemos doesn't showcase the same care and effort. And while not every track on Exit Lights was memorable (What remix project isn't at least partially forgettable?), the "Broken Heart" and the completely renovated "Fearless" remixes were fine songs. The only obvious remixes here are "Taipan" ("Diamnds") and "Evidence" ("Cicradian"), and, while a pair of other tracks on Mnemos vaguely mimic a couple of tunes on Your Sparkling Death Cometh, the rest of the songs are mainly instrumental bits. "Caves" is one of the few songs where words are present, and, although they aren't specific, the lyrics "you are the infinite" is likely a nod, if not a repetitive one, to God. While there is enough synth to go around, the piano plays a central role in Mnemos, and many tracks merge the two elements. Some of the songs that do stand out are "Pete The Little Robot Comes Home," "Earthship," and "Now Available On VHS," the latter of which acts as an action track for a soundtrack after the bizarre opening dialogue.

For fans of experimental, instrumental music or Falling Up, Mnemos is worth a couple of spins. After listeners get the gist of the album and its progressive structure, it's worth another few spins. But after fans have given their attention to the project for a couple of hours, it will no doubt appear as repetitive and forgettable. The price for Mnemos was right, the cause was good, and it's always great to hear anything from Falling Up, but this remix effort is likely only to survive in the hearts of diehard Falling Up fans.