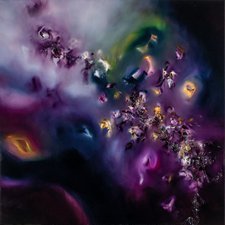 
"Where the Falls Begin," from the deluxe edition of The Everglow, was the first time a Mae song didn't click with me. After some time, I started liking it. Eventually, I loved the song so much that I was primed and ready for an album that continued in its musical direction. What we received instead, with the release of 2007's Singularity, was essentially the opposite, and I hated it. I likewise had little taste for 2009's (m)orning, and multiple years would pass before I'd give those albums a second chance. Now, both albums are all-time favorites of mine. Strangely, it seemed like Mae was always a few steps ahead of me, and eventually, I'd catch up with them and fall in love with their music.

After a long drought, the band has returned with the sort-of self-titled record, Multisensory Aesthetic Experience, and it's not the album many Mae fans will be expecting. For fans of the 3.0 EP, which gave us about half of the album two months ahead of time, the full-length is likely to feel like a bait-and-switch. There are no other songs on the album comparable to "5 Light Years," which is as thrilling and adventurous as (a)fternoon, nor is there anything else as immediate and catchy as "Let It Die," which recalls Destination: Beautiful and The Everglow in the best of ways. Even the official version of "A Race for Our Autonomy" fails to live up to its acoustic counterpart, lasting an additional two minutes with a big, horn-assisted outro that awkwardly sounds like a brand new song. In general, expectations set by the EP will cause this album to disappoint many listeners, especially on a first impression.

But is the album a disappointment overall? For anyone else thinking that "Let It Die" perfectly recaptured the Mae magic and hoping this album would contain a handful of similar gems, then yes, this album's going to disappoint. That single actually appears late in the track listing, as a bright spot in a set that prefers spacious and slow-burning over energetic and rocking. For example, the middle of the album places three songs together that all breach the six-minute mark. The first of these three, "You Fall When You Hesitate," flirts with a genre I can best describe as "progressive indie pop"; it might possibly be one of the album's best tracks, but it's a weird one that, personally, took me three listens before I could begin to understand or enjoy it. Still, "Hesitate" boasts some fantastic lyrics, which, like the 90's-alternative-influenced "No Promises," find singer Dave Elkins at his most thoughtful penmanship.

As fine-tuned as most of the production and lyrics are, though, the compositions themselves don't always seem finished. "Sing" and highlight "Simple Words" (which would've fit snugly on (e)vening) wrap up way sooner than they need to, while the fact that at least three songs have fade-out endings is, arguably, lazy. Similarly, the spoken word on "The Overview" feels like a cop-out, and the instrumental track "Flow" is more-or-less pointless. You know there's something wrong with the album's structure and pacing when "Our Love is a Painted Picture" doesn't fully come alive until the six-minute mark.

To the band's credit, Multisensory Aesthetic Experience is growing on me. And if history proves anything, it's that Mae's albums age well. I can imagine a future where I'll regret awarding this album only 3.5 stars. But from my current vantage point, it's impossible to tell whether Mae is two steps ahead of me or I'm two steps ahead of them, seeing through the cracks, perceiving how the members grew rusty during the hiatus, and noting how the album could've been stronger. Yet, at the very least, I'd rather let Mae make the music they want to make than waste my time clamoring for The Everglow 2. Hopefully, by the time Mae releases the next album, we'll find that this self-titled-ish release had more to love than I first gave it credit for.

Following in the wake of the six-song extended player, 3.0, Multisensory Aesthetic Experience finds the men of Mae fashioning a full-length offering around five of the EP's cuts along with six new tracks. The 3.0 project, while intermittently fetching, was nevertheless hampered by just enough weaker entries to render it one of the band's more uneven undertakings. To its credit, the latest release does fare a bit better, given that its longer run time allows the more subtle slower pieces to stretch out a bit more and truly sink in. And, to their credit, faster numbers like "The Overview" and "Let It Die" are as melodically beautiful and gripping as anything the band has ever produced. The trouble, though, is that there aren't enough cuts like these to vault Experience anywhere near the lofty heights achieved by the band's still-superior earliest efforts. Long-time fans would still do well to investigate the album given that the group's compositions do tend to get somewhat better with age. For everyone else, though, the best approach, ironically enough, would be to string the current record's five or six best tracks together into an EP's worth of truly engaging material. - Review date: 12/13/18, Bert Gangl of Jesusfreakhideout.com