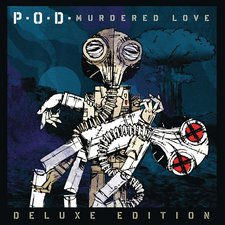 After an almost 3-year hiatus, in 2012, P.O.D. returned to the scene with Murdered Love, an album that garnered attention for the return to their iconic rap-rock sound. The success of the album inspired new music videos, and a re-release featuring a few bonus tracks.

The record kicks off with "Eyez" and leads in to the title track of the record. Both songs show P.O.D.'s heavier side, which really hasn't been heard in full effect since the Satellite era, circa 2001. "Higher" is very reminiscent of songs such as "Alive," "Satellite" and "Shine with Me." Once again, guitarist Marcos Curiel brings the odd yet awesome combination of beautiful melodies executed with crunching riffs. However, the record tends to get weaker as it progresses, with the exception of "On Fire" and "Babylon the Murderer."

Since the original release, the hardcore P.O.D. fans (aka The Warriors) have known about a track formerly titled "Burn Down Rome" from a photo the band posted of their recording progress board. While fans speculated it was included on a European release, they were delighted to see two bonus tracks, "Find a Way" and "Burn It Down," on the album's deluxe edition. "Find a Way" features very politically charged lyrics, even calling out the president himself in the spirit of Rage Against the Machine. However, the style is more melodic, and when the chorus kicks in, the guitar and melody is reminiscent of the Jason Truby era of P.O.D. "Burn It Down" kicks off with Sonny speaking in what I assume is Latin, which he does a few more times later in the song. While this song also seems to be politically charged, it takes on a more biblical approach with many references of scripture from Revelation, including the Book of Judgement, the seven seals, the battle of Armageddon, and the Second Coming. The track demonstrates the same high energy and groove as "On Fire." The only thing that takes away from its power is the bizarre keyboard solo over the bridge.

Also included is the Chris Blackwood mix of "On Fire," which was originally released to fans months before the debut of the album. It is in fact a different performance of the song which starts with a chorus, rather than a verse like on the album, and does not feature a guitar solo on the bridge. The original version of "Lost in Forever" is featured here as well, which has Marcos screaming "forever" on every chorus rather than just the last one as it is on the album. An acoustic version of "Beautiful" and "West Coast Rock Steady" offer a different flavor. With "Beautiful" being a ballad, the acoustic version does not stray too much from the original. However, "West Coast Rock Steady" opens up sounding like carnival music, which is more strange than amusing. There are also points in the track where Sonny is almost laughing while singing, which leads me to believe the recording was a live performance.

There are several videos with this release, including the music videos for "Beautiful," "Higher," "Lost in Forever" and "Murdered Love," as well as behind-the-scenes videos for "Beautiful," "Murdered Love" and "Lost in Forever." While I was hoping for a physical release, it turns out the deluxe edition was only released digitally, but nevertheless, this edition is definitely deluxe. With 4 bonus tracks, 2 acoustic tracks, 4 music videos, and 3 behind-the-scenes videos, this edition gives the P.O.D. Warrior what they're looking for. And in most online stores, it is very reasonably priced. What's interesting about this release is that it is missing the original closing track, "I Am." Most likely the band decided the use of language (multiple semi-bleeped uses of the "F" word) was causing more controversy than good.

To fully appreciate or understand a band in their current season, I believe it's necessary to get a little more insight into where they are. Honestly, I would recommend this version to someone considering buying the album for the first time. The bonus tracks, specifically "Find a Way" and "Burn It Down," are solid harder rock songs, and help make up for some of the weaker tracks on the record. Everything included in this edition, including the video, helps the listener get more insight into the band, and better appreciate their work. And while "I Am" is missing, it's evident the band wants to move on from that moment of their career. While they've still got a few stale points, I believe this record proves that P.O.D. is finally moving back in the right direction.