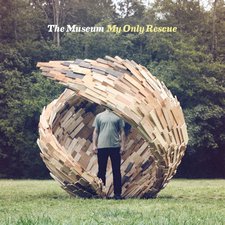 The Museum
My Only Rescue

It was only two years ago that listeners were introduced to The Museum. Their radio-friendly music and transparent lyrics were refreshing and quite surprising for a debut release. With their sophomore album My Only Rescue, will that standard be compromised or be raised?

The album opens with the pop-anthem "All Over the World." As the song that sets the stage for the album - it falls flat with the chorus resounding, "all over the world, let freedom ring, our God has risen from the grave." It sounds more like an American interpretation of worship rather than something Biblically grounded. Following is "Solid Ground," and unfortunately the track doesn't pick up for the lack of energy of the opener. On the bright side, the song is quite beautiful and uses excellent language to convey placing our faith in Christ. It's a great song but probably would have been more effective placed elsewhere in the album.

"Found in You" gives a great contrast to The Museum's previous release's "Lost in You." I am unsure if the paradox was intentional but regardless it is a successful track as well as seemingly creative. The title track "My Only Rescue" is a typical CCM radio single: clean vocals, simple words, and a melody that anyone can sing along to. In addition to this is the fact that, lyrically, it isn't as honest and raw as the Museum guys have previously offered. This CCM train continues onto "Love Will Find You" and "In Jesus Name."

Thankfully, "Coming Closer" redeems a lot of the problems with the early portions of the album. The guitars have beautiful distortion, the drums are tight, the synth is full, and Richter's vocals shine. This rock worship anthem is what set the guys apart from their peers last time and, sadly, it took over half the album to reach that point this time around. "Not for Sale" continues the excellence whilst also bringing attention to the global epidemic of sex trafficking. It is a masterful highlight that is written artistically and has potential to become the theme song for a movement.

"More Than Words" and "Better Than Life" feature a softer, more rock ballad approach to worship, giving a more intimate choice of words as they sing to the Savior. This sound fits the band well because it doesn't feel as forced as their "radio" songs do. Concluding the album is the funky "Lost in A Moment." Hands down, it has the best bass line on the album and really gives off the feeling of living for God on a daily basis and not just being a Sunday morning Christian.

So how did The Museum do with this new release? It's not quite clear. At points the album features some of their best songs to date. But more often than not, the standard is compromised. My Only Rescue might not be the best follow up, but these guys are definitely not down for the count. Hopefully in the near future we will hear some more of those edgier sounds that captured listeners the first go-around.