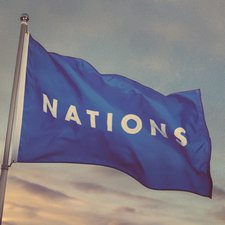 It's an admirable thing when anyone strikes out and leaves the safety net behind. We are all wired to look for the easy path whenever we can, and to orient ourselves towards whatever makes the trail ahead of us smoother.

In the case of the "new" artist Nations, the tough choice was to leave behind the old direction, sound and name of the former band "Above The Golden State;" a band with an established fan base and track record. The worship focus and musical maturity of Nations' self-titled first offering strongly suggest that a name change was the right call.

Nations opens with the instrumental "Sunset" and the track immediately sets the mood with its ambient textures and moody melody that brings to mind the feelings of the end of the day. The tune segues nicely into "Higher Than Mine," a song that sounds like the what might happen if Chris Tomlin and Owl City had a child, musically speaking of course. The fact that this combination works well is a minor miracle. The synths in the following "Light | Catechist" (a Latin term for a "teaching") bring to mind the famous opening bars of music from "Chariots Of Fire," but are quickly pared with a stirring melody and an encouraging challenge that there is nowhere we can go where the Lord is not present and "planning something" for us as believers. In "Breathe | Aurora," the lyrics reference the songs that precede it, and it's quickly apparent that there is a light narrative flowing through the songs (in the tradition of the book of Psalms), with the narrator moving from a place of running from the Lord to acceptance that God's way is the best.

In "Awake My Soul," a few of the album's best lyrics bubble to the surface. Set against a guitar that sounds like an Indian sitar, lead singer Michael Watson intones that before the Lord "all my scars have nowhere to hide, blood and tears write the pages of life" but that all of that pales in comparison with the chance to "serve in Your courts one more day." Good songs (and a few merely okay ones) finish out the album, and the ending "Amen | Doxology" completes the cycle of songs with a liturgical flare and a reference to the final challenge in the book of Jude ("now unto him who is able to keep you from falling") The instrumental "Coda" then bookends the album nicely, complementing the opening of the album. Only the "bonus track" "10,000 Reasons" (and even this cover is much better that other artist's versions that have popped up recently) mars what would have been a near perfect movement of songs and ideas.

Nations, with its cleaver mix of electronic and organic instruments, mature songwriting and vertical focus adds up to one of the best releases of the year, and a most welcome addition to any worship songbook.

Whatever else one might say about Michael Watson, nobody can accuse him of staying in one place for too long. After two peppy power pop albums in the vein of Matthew Sweet and Fountains of Wayne, he did an about-face and released an EP's worth of folky acoustic-based numbers before changing the name of his band from Above the Golden State to Nations and declaring his intent to release a worship project.

His latest effort is a decidedly eclectic affair, offering up everything from ambient-sounding electronic instrumental pieces ("Sunset") and lilting acoustic folk ("From Death to Life") to '80s synth-pop ("Light | Catechist"), austere piano-and-vocals balladry ("Amen | Doxology") and that which can only be classified as experimental ("Coda"). That said, for all of its diversity, it is still Watson & Co.'s most cohesive work to date, owing perhaps to the undergirding ethereal textures that bind its tracks together into such a tight and coherent whole.

To the band's credit, rather than crafting each song in search of the proverbial knockout punch, its members have instead allowed their vision for the latest project to unfold gradually over the course of the entire album. Fans of Top 40 pop/worship may find the new record a bit inscrutable in places. But those able to appreciate its subtlety and quirks will find it to be one of the more uniquely impressive worship-themed releases to come along in quite some time. - Bert Gangl, 7/31/13