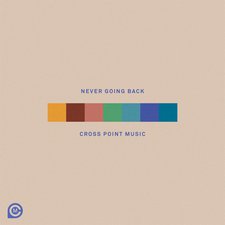 
Cross Point Music is the worship ministry of Cross Point Church in Nashville. After a series of EPs and singles, the praise band is releasing Never Going Back. This album follows in the trend of church bands releasing live worship albums for a broader audience. As such, the record carries a very familiar sound and feel that will be like putting on an old glove for some or scratching at an old wart for others.

The first three tracks of this effort fall more into the "wart" category. They're not bad songs in their own right, but they don't stand out from any other similar group's catalogue. "No One" especially feels the most cliché of the bunch. What these tracks do have going for them, however, is excellent writing in their bridges. The emotion the songs are trying to convey in the verses and choruses are nailed solidly, and even if the rest of the song is bland, the bridge will carry the listener into the moment.

The back half of this album is much more promising. Starting with the title track, things take a more gospel feel as the group (nicely backed by a choir) sing with determination to not be swayed by the devil after meeting Jesus. "Better" slows things down a bit musically but carries on the theme of the previous track (and the whole album, really) lyrically. "Just That Good" feels like a song that Crowder could cover, and the closer, "We're Ready," slows things down again with a willing submission to God's will.

It would be easy to pan Cross Point Music as just another church band trying tap into the market bigger groups like Jesus Culture or Bethel helped open. Never Going Back, for all its imperfections, still has enough strengths to warrant attention. With strong bridges, well-placed choirs, and a run of songs that feel fresh and energetic, the people behind this church band seem to have a more creative handle on what they're doing. There's room for improvement, but fans of the live worship album should find plenty to like here.