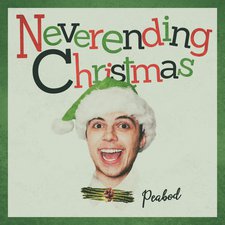 
This past summer, new Centricity Music signing PEABOD released his infectious debut album, Healthy Snacks. Channeling the fun and faith of hip hop artists before him, like John Reuben and KJ-52, but also not being afraid to show off his singing ability, Isaac Peabody is quickly becoming a talent to sit up and take notice of. PEABOD has quickly followed his 12-track debut with a brand new holiday single, "Neverending Christmas," and even released an accompanying music video.

"Neverending Christmas" is a great companion to Healthy Snacks; it bears a similar sound and vibe to it, while also feeling like a standalone effort. It's fun, it's boisterous, and it's got a great Christmas party celebratory mood. Isaac opens the track with the "Love and joy" chorus from "Here We Come A-Caroling" (or "A-wassailing," depending on the version), before breaking into a fast beat with horn blasts as he raps original verses about the season and his love for it. He continues to rap fast before transitioning into a trap-flavored chorus that recaptures a bit of the "Shoot From The Hip" sound from his debut. He doesn't shy away from singing about the reason for the season either as he keeps bringing the focus back to Jesus throughout the song, with verses like "Thank God for Jesus and seasons meant for receiving His love."

Really, the only downside to "Neverending Christmas" is that it's a short 3-minute song and not a full-fledged EP brimming with holiday goodness. It's fast, fun, joyful, and a great new addition to anyone's modern Christmas music rotation. Here's hoping we'll be getting more yuletide musical treats from PEABOD in the future!