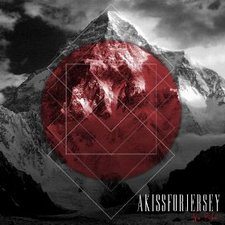 After abruptly breaking up in 2011, North Carolina Post-Hardcore band Akissforjersey have returned with their third studio album, New Bodies, on InVogue records. It's the album you would come to expect from them: no-nonsense Post-Hardcore. While not bringing anything new to the table, New Bodies is still an enjoyable listen for fans of the genre.

The opening of "War" abruptly blows the doors off in true Post-Hardcore fashion; equally distributed aggressive, heavy screams and Zach Dawson's melodic crooning in the chorus and bridge. Songs like "The Sound of Revolution" and "DeathEater" are solid songs that show the heavier side of the band. Unfortunately, the biggest problem with New Bodies is that the screams and production quality of the heavy parts often sound muddy and flat, and do not carry the impact that make heavy songs work. But the more melodic songs are where the album shines brightest. Tracks like "Dear Wayward," "Bones," and especially "Widow/Maker" are great songs with some of Dawson's most passionate and beautiful singing to date. The unique melodic tone of the guitars that accompany Dawson's singing does a good job at complementing his voice.

The lyrics of New Bodies aren't without substance either. The title track addresses selfishness, "Living life our way; What a guilty waste; ....We've been hiding from the sun, oh my God wake us up." "Revival" deals with complacency and apathy, "So buried under this overfed, under read, complacent bed that we have made." And lastly, the piano-driven closer "Everything New" is simply about God's restoring grace, "How can I let You love me like this? ...You're making everything new."