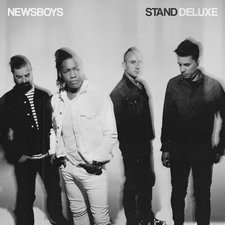 
The Newsboys have been on a roll over the past few years. Coming off the success of their "United" endeavor, the group released Stand last year. It was the first album that the group published in five years without the United label. The ten track outing proved to be another solid addition to their discography, seamlessly integrating their unique branding with accessible pop elements.

Now, the band has produced a Deluxe edition of Stand, adding five numbers to the record. A shortcoming in the original release was that no other artists were featured, leaving listeners with less diversity than expected. On Stand (Deluxe), the band collaborates with some of CCM's most recognizable names on multiple tracks, incorporating some new elements which were not previously present.

One of the standouts is "King Of Kings," which features Bart Millard of MercyMe. The cover of the popular worship anthem is executed well, as both singers balance with each other in smooth fashion. However, the rendition of "Stand" with TobyMac seems a bit unnecessary, as it's the exact same song. The band could have benefitted from adding a piece specifically for Toby to display his talents with, instead of simply replacing Michael Tait's vocals during the bridge.

"Jesus Did" and "All Things Are Possible" sonically fit right into the rest of the project. The latter draws directly from the book of Philippians, with lyrics such as "All things, all things, all things are possible / Nothing, nothing, nothing can stop you, Lord." The acoustic version of "I Still Believe You're Good" does feel a bit contrived. It doesn't change things up much at all, especially considering it is still driven by electronic elements.

Overall, fans of the Tait-era Newsboys will find more material to enjoy on the Deluxe Edition of Stand. That being said, those who were looking for something with more musical and lyrical inspiration should look elsewhere. Despite a couple of artist features, this record fails to break new ground in any sort of capacity, which is a shame.