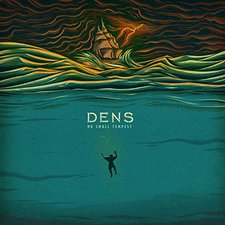 
Shortly after Indie Vision Music resurrected, they released a massive free music sampler called Hearts Bleed Passion, Vol. 6. The very first song of the two-part sampler was called "Hopebringer," by a band I hadn't heard of called DENS. The song ended up being a standout track, and they were later featured on JFH's sampler, Songs We've Been Trying To Tell You About (And Others We Haven't), Vol. 6. On a bit of a grander scale, the Richmond, Virginia natives caught the attention of Facedown Records, who is now the home of DENS and their national label debut EP, No Small Tempest.

No Small Tempest is no small EP; while it only boasts four songs, it's twenty minutes long, and most of that time is beefy. "Deadrise" wastes no time displaying the incredible musicianship of this band. DENS offers high quality indie rock music that fits in quite nicely with My Epic and the now-defunct Attalus. The music is interesting and well-written, with no piece out of place, and Shaun Hypes' vocals are super tight, effortlessly crossing between smooth singing and yelling/screaming when appropriate. Hypes' singing vocals are almost like a blend of Zach Bolen (Citizens/Citizens & Saints) and Joel Davis (Ascend the Hill), but at the same time, he sounds more like a new voice than anything. That being said, you can hear the resemblances fairly well in the beginning of "(W)retched," despite the slightly muffled effect on his voice.

"Sackcloth & Ash" is a highlight; gang vocals jump you right into the thick of it at the start, but it almost throws you off, as most of the song is a bit more tame. I particularly like the drums in this song, as Brandon Osborne keeps a pretty basic time signature, but refrains from simply using the kick-snare-kick-kick-snare beat. He keeps himself busy in this song without overwhelming the listener. "Vice & Virtue" closes the EP with a sound more akin to a band like Artifex Pereo, but mixed with some classic rock characteristics. It's a strong indie rock song with a nice groove, and some of the guitar riffs remind me of an era of rock long before their time.

One thing I like about No Small Tempest is that everything feels purposeful and intentional. One of the clearest examples of this is that the first three songs all end with a slower, modern rendition of some classic hymns: "Come Thou Fount of Every Blessing," "It Is Well With My Soul," and "Down to the River." Truth be told, you can also see this in their debut, From Small Seeds Come Giant Trees, where each song title is a different description of God ("Lifebreather," "Peacemaker," "Debtpayer," etc). DENS is a band with a purpose, and it's highly recommended that you familiarize yourself with them. I anticipate greatness with their next full-length.