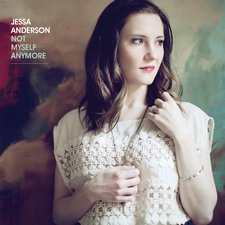 Jessa Anderson
Not Myself Anymore

In the same vein as singer/songwriters Audrey Assad, Ginny Owens, and Nichole Nordeman comes newcomer Jessa Anderson. Boasting a charming pop-tinged soft rock façade, it didn't take long for her independent full-length record, entitled Not Myself Anymore, to fall into the hands of BEC Recordings; immediately impressed with its quality, BEC re-released her album with a brand new song and the smallest of tinkering, resulting in her debut as a signed artist, and it's an outcome that deserves a decisive ear.

As with many artists of this genre, Anderson's sound serves merely as the backbone to hold up the important messages she shares, inevitably lending itself to using potentially less-than-imaginative melodies. This is especially evident with "Fireflies," the new track to this edition of Not Myself Anymore. Obviously produced separately from the rest of the album, a bouncy piano base leads into a simplistic, ear-catching chorus. One could be quick to judge the album based on the radio-friendly feel of this track, but they would miss out on the otherwise comforting contemporary vibe of the album's whole. Her inclusion of pianos only gives her sound a more pleasing atmosphere almost akin to Norah Jones or Adele with an inviting "coffeehouse" approach. Anderson exercises her vocal talents quite effectively, as well, saving the impressive notes for when they can impact the song the most; they feel sweet and relatable, a perfect blend to pair with her lyrics at hand.

Not Myself Anymore lyrically ranges all over the spectrum; "Fireflies," "Worship the Lamb," and "Offering" are straight-up worship songs with varying degrees of excellence, but it's the tracks focusing on the reality of life's struggles that are executed the best. "Everybody Has Those Days" and "The Same Place" puts man's tendencies toward sin out in the open ("You made another big mistake/didn't anybody ever say, we all lie in the bed we make/'it's fine, we're all good inside,' or so you say/but we all come from the same place"), while the title track shows the aftermath of a broken relationship and a changed heart through the process ("But I can't seem to figure out why/I'm not myself anymore and I cry all the time/and you, you're unaccountably gone/you've got no explanation for leaving me alone/well maybe we shouldn't have let it go on for so long"). The most convicting track, however, is "Return," which urges listeners to take refuge in Christ and not in their grief ("Afraid of being hurt, we only give until it costs us something/so they won't see the worst, we tell ourselves it's better/they see nothing, but we diminish everything you are by hiding out inside ourselves/we need to return to you"). When Anderson's heartfelt songwriting holds little back, the listener can only empathize and lead themselves to self-application.

In her words, Jessa Anderson "always gravitated toward women who were writing their own music" and their accompanying honesty. Indeed, after closely examining Not Myself Anymore, her transparent style works to her advantage. Although her lyrical profundity varies from song to song and her musical approach isn't particularly inventive, those who invest the time can only benefit from Anderson's musical journey.