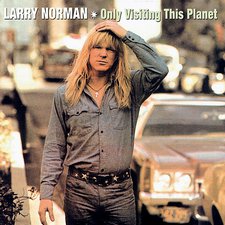 Larry Norman
Only Visiting This Planet


Larry Norman's Only Visiting This Planet is as important to the "Christian Rock" scene as "Sgt. Pepper" is to the secular scene. It was the first Christian rock album selected for the Library of Congress National Recording Registry.

Norman wrote edgy songs. "Why Don't You Look into Jesus," his song inspired by Janice Joplin's tragic life, cuts hard with lyrics like "Gonorrhea on Valentine's Day," but Norman addressed the issues of the day. The music is top notch, especially for Christian music at the time. Solid rhythms set up Gordon Giltrap and Mickey Keen's guitar work behind Norman's piano. By current genre assessment, one might consider it Southern Rock. It certainly has many of the same elements.

There isn't a bad song on this album. Some have become classics, such as "I Wish We'd All Been Ready" (featured in the movie "A Thief in the Night" and popularly covered by DC Talk in the mid-90's) and "Why Should the Devil Have All the Good Music."

The only issue with Only Visiting This Planet is that because Norman directly confronted the issues of his day, the album can be quite dated. However, this also makes the album a good historical marker.

Only Visiting This Planet is a must-listen album for anyone interested in the history of the Christian Rock movement. This could easily have been titled, "Songs from a Christian Outsider," because that is how many in the established church saw Norman.