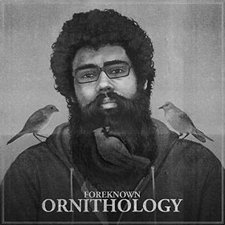 In 2010, Humble Beast Records debuted their very first release: a ten-track compilation appropriately titled Humble Beginnings. Between then and now, the label has produced high quality recordings from several of the artists from that sampler (and more). In fact, some of the best hip hop albums of the last four years have been from Humble Beast artists, such as Propaganda, Alert312, and Braille & Odd Thomas (who, with Courtland Urbano, comprise Beautiful Eulogy). One of this sampler's artists we haven't yet heard from is the rapper Foreknown. Until now, that is. Foreknown's Humble Beast debut is finally here, and it's called Ornithology.

To bring everyone up to speed, "ornithology" is the study of birds. And understanding the reason behind the title of the album requires listening to the title track and having a basic understanding of a portion of Scripture. In Matthew 6 (or Luke 12), Jesus says not to spend time worrying about life, and to consider the birds, "for they sow not, neither do they reap, nor gather into barns; yet your heavenly Father feedeth them. Are ye not much better than they?" The title track addresses the hesitance that some people feel for fear that something might happen or that God will forsake them. "You're designed to fly, but you're content in your nest so you chill in trees, if you ever wanna leave the ground, can't let your worries weigh you down, it's been said and I know you've heard, you gotta just consider the birds, ornithology."

The bird theme carries out through the album in a few other songs as well. "Bird In Hand," which features new Humble Beast artist JGivens, is a satirical look at materialism using the old adage "A bird in the hand is worth two in the bush." Foreknown gets into some deeper territory in "Cathartes Aura (Vulture)," as he tells a tale of two sexually-promiscuous people who think they love each other but are really just taking advantage of and feeding on each other's insecurities to fulfill their own desires. He tackles the issue of pride in "The Truth About Flight, Love, and BB Guns" as he tells of a bird whose pride leads to...well, look at the song title. The last bit of the ornithological theme comes in the lyrically-surprising song "The Phoenix." If you don't know the fable of the mythological Phoenix, it's about a bird that burns up, but then rises back up from the ashes. This song deals with the things that people say to us that can really tear us down, but that we have victory in the end. Foreknown goes through a whole verse of the many names that mean people can refer to us as (although I believe the purpose and heart behind this song make it not vulgar, this is one to skip over if you're listening with a younger or more sensitive audience), but the hook is redemptive as he says "Sound familiar? Show of hands, sticks and stones can make a broken man, but it's words that'll choke you, smother and enslave you, and if you let it, it'll break you, they just wanna see you crash and burn, but even if you do they have to learn that when you crash and burn you're gonna rise like the Phoenix."

Now, Ornithology is a bit of a different animal than we've previously gotten from Humble Beast artists, in several ways. Generally, a Humble Beast album will have the same entity as producer from start to finish. Propaganda's last couple of albums were done by Beautiful Eulogy, while Beautiful Eulogy and Alert312 usually self-produce their albums. While Beautiful Eulogy is responsible for some production on this album, there's also production from Courtland Urbano's side project The Bridge (with D. Steele), as well as Moral One from Alert312. Either way, we're looking at some strong production and amazing beats. Another thing that separates this album from other Humble Beast releases is the song topic/lyrics aspect. Ornithology tips the scale on both sides, going back and forth between the silly and the serious. One minute, Foreknown is rapping about his desire to do nothing but play video games in "The Quartermaster," and the next, he's making a comparison between zombies and the lost people in the world. In "Double Tap," Foreknown sings (in a deliciously catchy hook), "Now everyone around me is turning into zombies, they're coming at me and I can't explain, I wanna love them still, they just wanna eat their fill, I'd offer them my heart but all they really want is brains." Though the comparison isn't a new one in modern culture, the way Foreknown explains it is brilliant, as he concludes by saying "They've been steadily multiplying since the third of Genesis."

"Minivan" is another silly song, as Foreknown raps about how hard he is while driving around his family-sized minivan, reminding us that "Real gangsters always choose affordable and practical," and later in the tracklist, he invites us to come over to his house in "#FootyPajamaPizzaDanceKaraokePartyGo!" as long as you "don't eat all the pepperoni." But when it comes time to get serious, Foreknown doesn't beat around the bush. As I mentioned earlier about "The Phoenix," he doesn't shy away from putting out tracks that are not appropriate for the younger audiences. "The Phoenix" and "Cathartes Aura (Vulture)" are two examples, and the rest come near the end of the album. "Little Miss So & So" is a story about a lost teenager who seeks out sex as a means to cope with her seemingly meaningless life, and the struggles that come along with that (physical, spiritual, emotional). The end is redemptive though, as he talks about her encounter with Jesus, who offers her living water. The album follows with perhaps my personal highlight, "The Never Haves." I bring this is in regards to the "not appropriate for younger audiences," though there's only really one thing in it that applies, when Foreknown says "I've been called an Uncle Tom and a n*gger on the same day," as he talks about all the negative things he's experienced in life. In the second verse, though, he talks about all the negative things that he's never experienced, and that he will never have to experience. For instance, he says "Never stood before a crowd who was unanimous and wanted to crucify me and instead release Barabbas, never had a crown of thorns jammed in my brow, stripped naked while my captors mockingly bow, never been between two thieves nailed to a tree, crying 'My God, my God, why have You forsaken me?'." He concludes with a powerful bridge: "And I never will, You did it so I never will, Father thank You for Your grace so I never have to taste of death, because You stood in my place I never will."

Foreknown really came out of the gate strong with this album. Ornithology is as diverse as Foreknown's beard is large (and amazing), and it's a superb hip hop album that stands among the best of the year, despite the fact that it may go under the radar, even amongst fans of other Humble Beast artists. Don't let the lack of attention hinder you from getting your hands on a copy of it, though. Be prepared to laugh at the quirky songs, to think on the profound messages, and nod your head to the excellent beats. You can get it in the usual places (Amazon, iTunes, etc.), and as always, it's available for free download at humblebeast.com. However you acquire it, do so, and let it really sink in.