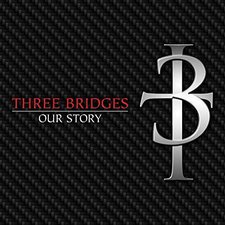 
Three Bridges, consisting of Elliot McCoy, Shannon Smith, and Jeremie Hudson, have released their first album since reuniting with their previous label, Sonlite Records. The group is coming off of last years Hymns and Classics Renewed release with their next project, Our Story. That title naturally brings to mind the hymn Blessed Assurance-- a song of comfort in the security in Christ, which the title track of the album directly invokes.

Our Story is cohesively filled with songs that celebrate the gospel, God giving us peace during trials, and eternal life. Interlacing a southern gospel style with the jazz and blues elements of black gospel, Our Story helps Three Bridges stand out within their genre. While this hybrid of sounds is unlikely to entice those who dislike the southern gospel base ingredient of their musical dish, it does a lot to help freshen up a familiar Christian music staple. But even when the album sticks to traditional southern gospel sounds, such as on the song Live the Gospel, they do it effectively. Powerful melodies and well-placed harmonies crescendo into a powerful climax in the chorus reprisal. Good News Never Gets Old, is an upbeat expression of the unchanging yet ever-important message of Jesus sacrifice for us. The final track, The King of Love My Shepherd Is, wraps up the album perfectly with a mixture of lyrics both new and vintage, about finding peace in the Love of Christ. From beginning to end, Our Story is a successful work of spiritual encouragement put to music.

This album is not a huge leap of innovation for the musical landscape, but instead it iterates with clever genre fusions that allow it to stand out and feel original even when treading familiar ground. Very uplifting and encouraging lyrics, combined with a pleasant mixture of topics both somber and joyous, make Our Story a solid release that is easy to recommend to someone looking for a solid southern gospel album.