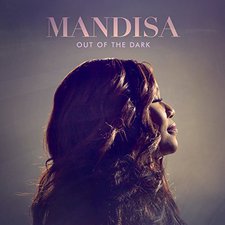 Mandisa
Out Of The Dark


If there is one consistent knock on Christian music, it's that the genre is full of unapproachable artists, whose lives seem squeaky clean, and whose problems (if there are any) are vaguely defined "struggles" that are easily overcome by the end of the bridge of the song they are singing. But it's been said that although all people can appreciate the sunlight, few appreciate it more than those who have known a long darkness. A song about struggles hits harder when you know the story behind it.

Miss Mandisa Lynn Hundley has never been one to gloss over her personal issues (including a well-documented struggle with food addiction and image), and while she's known for triumphant songs such as "Stronger" and "Overcomer" (the title track of her 2014 Grammy winning album), those songs seem to come from an honest place of struggle. Combined with an honest stage presence and testimony, Mandisa has carved out a niche in Christian music for true "soul" music, that is, honest music about struggles. On her latest album, Out Of The Dark, Mandisa continues to pull back that mystique of the "perfect Christian performer" with precision.

It all starts with a bold choice to release a series of increasingly urgent and concerned voicemail messages from friends as the opening track, suggesting that there is something tough going on in Mandisa's world. It's an interesting choice for the beginning of the album, but one that gives a real-world context to the opening song, "I'm Still Here." A poppy number in the mold of "Overcomer," this uplifting track is grounded in the knowledge that all was not right in Mandisa's life not so long ago.

The following title track is a bouncy bit of soul music that makes great use of a horn section and a groovy funk music vibe. The production on the horn section alone is worth the price of admission, and this dancey number will surely get the audiences on their feet in the near future. "Unfinished" completes the opening salvo of victory songs, with the biblical injunctive that "God has started something good / and He's going to complete it / so I celebrate the truth / He's working me through / I'm just unfinished."

"We All Bleed The Same," a song that features Mandisa's BFF Tobymac and Gospel Music luminary Kirk Franklin, is a well-done response to the Black Lives Matter tension of the past few years, and shows a gospel-centered, balanced response to this ongoing reality in many parts of our country. Kirk Franklin's opening and closing prayers are needed grounding moments in a song that easily could have been a sincere-but-hackneyed misfire. As an editorial note, it's interesting to note that the few songs in Christian music that have addressed this national issue have come mostly from artists and bands that feature members who are African-American (Mandisa, Newsboys, Propaganda, Lecrea). Other than Tobymac's presence on this track, the white side of Christian Music seems to be strangely silent on this issue. It's a shame.

The remainder of the album contains many highlights. The on-point girl power anthem "What You're Worth" features fellow pop artist Britt Nicole, and channels a bit of Pharrell Williams' "Happy" in its catchy groove, while Mr. Jeremy Camp shows up for "My First Love," which mixes the two artists together quite well. "Keep Getting Up" is a nice mellow moment featured on the deluxe version (the best version of this album, and at a massive 18 songs, one that doesn't feature much filler material), and brings the mood to an appropriate, contemplative ending.

Out Of The Dark is a great return for Mandisa, and an album that shows that you don't need to sacrifice depth for a radio-friendly appeal or a summertime groove. There is a real sense that Mandisa has been through the fire in the last few years, and this album is a solid testament that the view on the other side of a dark tunnel is one that is worthy of singing about.