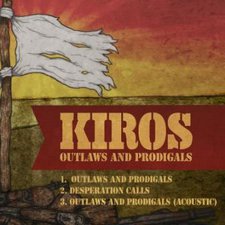 In 2007, we got our first glimpse at Kiros, a Canadian band with clear ability to write pop rock jams. Their first album, A Single Strand was a collection of catchy, Christ-centric songs with a couple soft pieces mixed in. The results were solid, but mostly forgettable. There weren't many moments where we were given something that has not been offered up by countless other rock bands. It did, however, have a couple outstanding tracks, like, "That I May Not Cause Pain" and "City Lights." For their second full-length, and first with Ain't No Grave Records, Kiros decided to stray from the normal format. When Lay Your Weapons Down releases, it will feature ten tracks spread across three different acts: The Revolt, The Trenches, and The Surrender. The Outlaws and Prodigals EP is a brief teaser for their ambitious new project.

Outlaws and Prodigals is very short, even for an EP. There are only three tracks here, and one is an acoustic rendition of the opener. It's quite difficult to show diversity and growth for fans to get excited for with only two new entries. With very little to go on, it seems the same problem from the first album is still present; it all sounds very familiar. It is worth noting, while not particularly unique, that Kiros does execute the sound well. Where Kiros begins to separate themselves from their pop-rock peers is with their faith-centered lyrics. "Outlaws and Prodigals" is the better of the two tracks, lyrically, "Aren't we all just outlaws, Aren't we all just prodigals, With glimmers of a greater love, And shadows of our fall." The acoustic version's simplicity works in the song's favor and easily outshines the original.

"Desperation Calls" is a bit more upbeat than the song it is sandwiched between. Like the other track, this one contrasts our weakness with God's strength. The worship lyrics rival that of any CCM artist on the radio, "You're the fire, you're the flame, That burns inside this empty place, This hope, the remedy that's racing through my veins, You are my all, Always there to break the fall, And my rescuer when desperation calls."

While the two new songs here are adequate, it's hardly enough to justify picking up a copy of Outlaws and Prodigals. Hopefully the full-length, when it releases next year, will offer up some musical originality to accompany the uplifting lyrics and unique concept.