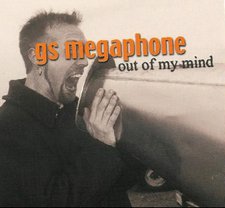 GS Megaphone
Out of My Mind


GS Megaphone's Out of my Mind is a little-known album by a Christian grunge outfit from the early 2000's. Any person who enjoys Christian hard rock will be able to find at least a few songs that would fit nicely in their playlists (if the album were on streaming services), but the album as a whole is a little less exciting.

While the first two songs of Out of My Mind bring quite an explosive opening, the album never really gets much more exciting. If anything, the songs start to get more and more boring as the album progresses. The lyrics are relatively safe in their blatant Christianity and the musical style varies very little. This issue is only compounded by the 63-minute runtime. At least Out of My Mind closes with one of its more aggressive songs, thus leaving a more pleasant sound in the listener's ears when the album ends.

Musically, this album reminds me of Grammatrain's Lonely House but less dreary, with Creed being an obvious influence in both the vocal and musical style.

Lyrically, there isn't much that is all that distinct. A few lines may stand out, but most of the album's lyrics use blatant Christianity in the bland style of some other Christian rock bands at the time, like Petra. Despite the minimal risks taken in this area, applause is deserved for the band's seemingly genuine ministerial motives and the positivity that they bring to a genre mostly dominated by negativity (which was something that Grammatrain leaned more into).

All around, Out of my Mind is an album that I would recommend for any Christian grunge or hard rock fan who prefers blatantly Christian lyrics. The album isn't currently on Spotify, but it can be found in full on YouTube.