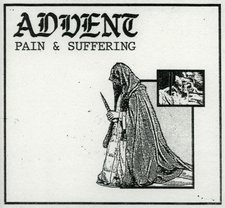 
Advent formed as three quarters of the post-hardcore/emo band Beloved. While Failure On was a great record for Beloved, Advent brought a very different full-on, fast-paced hardcore sound to the table. With two quick albums under their belt, Advent fizzled out after 2009's release. However, the band has recently reunited to release a new EP. Pain & Suffering features four blazing hardcore punk tracks that are sure to please fans of the genre. Because it is becoming a little more difficult to find this brand of hardcore with modern hardcore and metalcore -- and every other "-core" available -- dominating the scene, this EP is all the more tasty. The four songs provide a total run time of just over 18 minutes. "Wind From the Valley" cranks things up in a hurry with Joe Musten growling his way through the entire piece. The final squeal of the guitar leads right into the ripping pace of "Weight of the World." "Shadow of Death" starts with a slightly slower chugging tempo than the opening two tracks, but picks up the pace significantly as it progresses. As with the first track, a squeal at the end of "Shadow of Death" leads directly into the closer, "BrickxBrick." While "Wind From the Valley" is arguably the best track present, "BrickxBrick" provides some serious competition and is a fun listen once it really gets cranked up.

Pain & Suffering is an enjoyable EP, but it's not without its flaws. Each song fluctuates tempo very predictably: fast opening, slow breakdown-like middle, faster ending is the main formula. It would've been a blast to hear a true old school song the rips through from front to back in 2 minutes or less, never slowing down and never looking back. While it's not a perfect return for Advent, this EP is still quite good. Fans of hardcore and hardcore punk styles, and certainly original Advent fans, should find a lot to like with this release. It's doubtful that Pain & Suffering will be viewed as a top metal album this year, but it is still a fun listen to get the juices flowing.