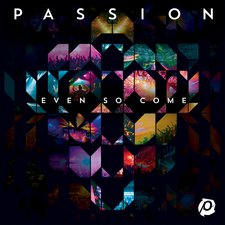 Passion
Even So Come


With a yearly release from the Passion organization, based on their annual conferences, hitting the nearly-twenty year mark, the formula for these albums is fairly set in stone at this point. Each conference (and its official live recording) introduces a few new songs from the group's flagship artists, usually from upcoming albums; feature one or two new artists and incorporate a few old favorites into the set list. An old hymn might make an appearance every so often as well.

This is not to say that this is not a winning formula. To fault the Passion conference for adhering to a rote formula is to fault the Grateful Dead for producing the same kind of concert experience for fifty years, or Alfred Hitchcock for making scary movies time after time. It is something that they do better than almost anyone else, and they have no reason to switch up the formula at this point. It is a known commodity, yes, but a well-loved one.

Chris Tomlin opens things up with the title track, and finds Tomlin doing what he does best, creating anthems that soar and bury themselves in the memory with a catchy melody. The Passion projects are where Tomlin introduced staples like "Our God," "Lay Me Down" and "Whom Shall I Fear [God Of Angel Armies]," and against that impressive list of songs, "Even So Come" sounds a bit underwhelming. This could also be from the seven-minute-plus running time. Tomlin's other original songs featured here ("The Saving One," "The Cross Of Christ") are similarly well done and sincere, but a bit pedestrian when measured against the great songs he has come to be known for.

If there was one artist that has traditionally pushed against the boundaries of the sound that Passion is known for, it's David Crowder, and his stomping, barn-burning "Lift Your Head Weary Sinner" is a welcome burst of menacing energy in a set list that leans heavily on the same tone throughout. New Crowder tune "Wonder" nicely weaves the old hymn "How Great Thou Art" in and out of the song's structure.

The best moments of the live experience are the four songs that close out the album. "We Fall Down" is presented in an unplugged format, and the tune's classic melody loses none of its power. Matt Redman's similarly loved "The Heart Of Worship" cuts through the flashy song presentations and pageantry to deliver a heartfelt moment. "It Is Well" and "How He Loves" bookends hundreds of years of Christian songwriting tradition nicely--the old and the new--all saying the same thing, generation to generation.

The Passion conferences and their accompanying music, like any artistic enterprise, have their high and low points, but thankfully, Even So Come has many more of the former than the latter.