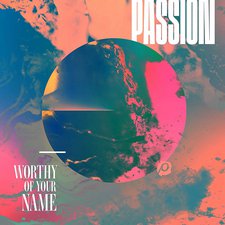 Passion
Worthy of Your Name


Last year, Passion skipped their annual live album and instead opted to go with their first studio album in sixteen years. Salvation's Tide is Rising was a short ten-track outing, but it began to show a shift in leadership from the worship collective. 2017's effort goes back to the live setting (aside from two studio tracks at the end) and continues the shift as it appears that Kristian Stanfill has now supplanted Chris Tomlin as the worship leader of the group, just as Melodie Malone has replaced Christy Nockels as the female lead; Tomlin is only featured in one song and Nockels is completely absent. However, Stanfill leads on five tracks. Crowder makes his patented two-song appearance, as Matt Redman continues his streak of single-song offerings. Brett Younker, featured on Even So Come and Let the Future Begin and Bellarive vocalist/guitarist Sean Curran round out the 2017 Passion line-up.

The studio treatment received by Salvation's Tide is Rising was a nice reprieve from the typical Passion fare, but their newest, Worthy of Your Name, returns Passion to what they are known best for doing. The music and lyrics are exactly what you'd expect, but the biggest surprise is the drastic shift to Stanfill. Chris Tomlin is synonymous with Passion and his near absence is a bit astonishing. However, this could spell a new day for the group. Tomlin (and Nockels) has headlined the group for so long that the time for change has finally arrived. Musically speaking, the album sounds like a Passion worship album. The song that stands out the most is very likely the title track. Sean Curran's voice is a little more unique than the other members and really helps to make the title track one of the album's best. Another song of note is the inclusion of Hillsong UNITED on the album. Crowder tag teams with Matt Crocker to do a rendition of the HU song "Rule" from Empires. Melodie Malone's song, "Holy Ground," is a beautiful listen and Tomlin's lone contribution is one of the better songs from Never Lose Sight with "God of Calvary." As far as Kristian Stanfill goes, his best track is likely the faster-paced "Glorious Day," or the more ardent "This We Know."

Worthy of Your Name provides a fairly entertaining and worshipful listening experience, though there is certainly nothing shocking or new provided musically or lyrically. Fans of modern worship tunes in constant rotation on CCM radio will find a lot to love about Passion's latest. Those yearning for something new and exciting, however, may want to pass. The addition of Sean Curran was a great one and it's a bit disappointing that he was only featured in one song (a live and studio version). One can hope that Curran joining Passion may be pointing to a new Bellarive album, or a solo Sean Curran record. That very well could be the most exciting thing about Worthy of Your Name. As for now, those looking for their yearly dose of Passion will undoubtedly be satisfied.