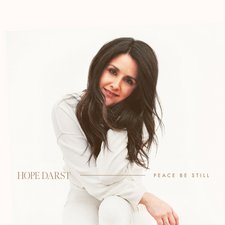 
Hope Darst is a worship leader at the well-known Nashville church "The Belonging Co." and is now bursting onto the Contemporary Christian Music scene as a solo artist with her first album, titled Peace Be Still. The album currently sits atop the iTunes Christian music charts, and the title track is skyrocketing on Christian radio charts around the world. While Darst clearly shows excitement and has a heart to lead others into worship, her debut album is wholly void of anything new or exciting. The sound is typical, radio-ready pop, and the words penned are the latest in a line of overtly cliche and shallow themes crowding Christian radio airwaves today.

The album begins (after a short instrumental) with perhaps its strongest song, "Set Free," which properly utilizes backing choirs in a southern gospel style, with lyrics not terribly original, but formidable, proclaiming our freedom from sin through Christ, "Found in Your mercy/I've been washed clean/You call me whole/saved and redeemed/I've been set free."

From there, the album spirals down into the morass of CCM albums just like it. And lyrically is where this album falls the hardest. Vague metaphors are in abundance here, comparing present trials to chains, darkness, waves, storms, etc, that at this point, are nothing short of lazy crutch words used in almost every song gracing Christian radio today. Even more troubling is the seemingly tacked-on addition of God, viewing Him primarily as a means to an end of earthly problems, instead of trusting Him and His plan even if we don't receive immediate deliverance from whatever presently ails us. Consider the lyrics to "Let It Out": "Here comes a miracle/Nothing's impossible/God You're unstoppable/When I praise/Here comes a miracle." Or the otherwise strong "The Hope Of Jesus," which begins with a powerful statement of our eternal hope validated by Christ's resurrection, before this theme dissipates back into focusing on individual trials using bland CCM tropes: "Every lie, every chain, every sickness it will break/Every fear, all my shame/It stays buried in the grave."

Adding to the problem is the cringe-worthy relationship language used throughout, such that if Darst didn't mention God a few times by name, could just as accurately describe a boyfriend or girlfriend: "I've never known love like this/So beautiful/I'll never get used to this/My heart is Yours," and "Here I remember who You've always been/Here I remember the moment that we met/Every time I surrender/It all comes back again." While Biblical language of God's love is always grounded by truths of God's holiness and His self-sacrifice on our behalf, such grounding is absent in Darst's lyrics, leaving only a cheesy diminishing of the love that she is so highly trying to portray.

Musically, little to no uniqueness is offered. Standard, mid-tempo, made-for-radio pop is delivered in a vein similar to other female artists like Kari Jobe, Natalie Grant, and Meredith Andrews -- which makes sense as all of these singers are also involved in "The Belonging Co." Darst's singing voice is good enough, but it's a voice we've heard before, not bringing much in the way of charisma or distinctiveness. The aforementioned single "Peace Be Still" sees Darst somewhat rise in the vocal department, while continuing to miss on the lyrical front, using water references much like Hillsong's now classic "Oceans" but without the powerful call-to-action that made "Oceans" so convicting. When there is a fairly unique idea, such as the short "Sing My Way Through," it's quickly snuffed out by neverending repeats of the title, and a reluctancy to delve deeper into the subject at hand.

There's no doubt Hope Darst has the potential to make it big in the Christian music scene, and she's obviously well on her way to doing so. But for this reviewer, her popularity says a lot more about the current state of popular Christian music then anything else. While I cannot deny her obvious enthusiasm and heart for the Lord, as an album, Peace Be Still is a miss.