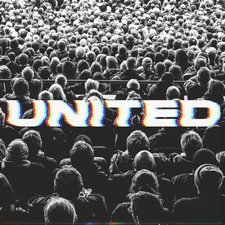 
Whether you know worship music or not, you would be hard pressed to not at least recognize the name of the phenomenon that is Hillsong UNITED. From their surf rock youth group beginnings to their stadium-sized U2-inspired anthems, synth-driven stylings, or even a brief turn to ambient tones; UNITED has reinvented themselves many times over. Despite their musical direction changing, they have remained accessible, in large part, because they continue to churn out songs for the church to grab ahold of as their own. Returning with new music after 2017's studio offering Wonder, UNITED drops a live album, titled People. With their newest project, gone are the 80's synth-sounds of Wonder and the whispered pop/rock of Empires. Instead, listeners are treated to a revisit of their guitar-led sonics, with dashes of keys and organ. People feels like a return to their roots as a band, and the call to unity is crystal clear. The whole album is an exercise in dynamics, with builds, and crescendos, albeit a long one, at a whopping seventy-four minutes. Yes, the album carries with it a demanding time investment, but this reviewer believes it is worth it.

"Ready Or Not" begins the album on a hushed, but warm note, as the band lays a slow-burning invitation to the listener to join them in worship, stating, "Come now/As you are or as you want to be/Are you ready?/Are you ready?" The second track, "Here's To The One," sounds most like their earliest work, with strong guitar lead lines and the requisite "woah oh" gang vocals. It would also have worked well as an opener to the album, but it's a good song to drive the energy back up after a more subdued beginning. The first highlight song finds Taya taking lead vocals on the previously released single, "Whole Heart (Hold Me Now)." This song kicks off a string of several lyrically rich songs in a row, as the entire album builds to its sweaty, and satisfying, conclusion. In fact, though the start of the album is strong, from track four on, you would be hard pressed to pick a truly weak track musically or lyrically.

In this reviewer's opinion, the best lines of "Whole Heart (Hold Me Now)" are featured in the verses, with the second being the favorite for now. In it, Taya sings, "Lifted up/And my knees know it's all for Your glory/That I might stand/With more reasons to sing than to fear." Musically, the song continues to build, elevate, and swell until its crashing resolution. The deeply personal Joel Houston-penned "As You Find Me" follows, and it is perhaps the best song on the album, although "Another In The Fire" could make a claim for that title as well. Former UNITED singer Tulele Faletolu makes a surprise return to handle co-lead with Taya, and his vocal presence is a perfect complement to her sweetness. The pre-chorus hits especially hard with the truth for all believers that, "I was found/Before I was lost/I was Yours/Before I was not/Grace to spare/For all my mistakes/And that part just wrecks me." Both vocalists hammer home the bridge, trading earnest cries of, "If you want my heart/I won't second guess/'Cause I need Your love/More than anything." These are just a small sample of a song chock-full of stellar lines throughout. The next track Clean, works as a simple yet effective palate cleanse, helping separate two huge sounding songs with a simple lyric and auto-tune effect on Tayas voice.

Other lyrical highlights among the tracklist are "Starts And Ends" (co-written by Joel and Brooke Ligertwood), "Highlands (Song Of Ascent)," and "Another In The Fire." Encouraging lyrics of now, and not yet, proclamation flow from the chorus of "Another In The Fire" like, "There'll be another in the fire/Standing next to me/There'll be another in the waters/Holding back the seas/And should I ever need reminding/How good You've been to me/I'll count the joy come every battle/Cause I know that's where You'll be." This is probably the most immediately accessible song for both personal and congregation use; with its inspiration coming from familiar Old Testament accounts of the fiery furnace in Daniel, and the parting of the waters in Exodus respectively. Finally, the thesis of the album comes in the form of the last pair of songs, "Good Grace" and "Echoes (Till We See The Other Side)." Though they are simple, the organ rings loud, as Houston remarks, "I've got a feeling, it's going to get rowdy," as the audience claps and sings in unison with the band, "Swing wide/All you heavens/Let the praise go up/As the walls come down." Perhaps cheating a bit, "Good Grace" slides right into "Echoes" as if one extended jam was divided in half to make it more palatable. It's almost as though they didn't want the night to end, tagging a danceable, fever-pitched coda.

With People, it's no stretch to say that Hillsong UNITED has released one of their best overall albums. It's lyrically deeper than most in the genre, confident enough to take its time to deliver musically, and just experimental enough to keep things interesting for the whole runtime. Yes, though it may be hard to believe, UNITED may have just released their best album to date, as Joel Houston and company continue to grow stronger in their craft. Don't miss this one!