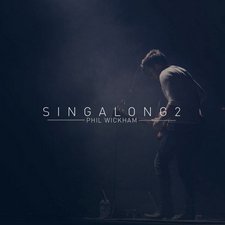 Between the energy and connection the band and crowd create and getting to meet said artist/band after their show, there's nothing like attending a concert featuring your favorite artist. Unfortunately, not everyone can attend concerts, so the next best thing that artists have put together is a live album. Live albums attempt to capture the same energy that goes on during the show, but can be experienced in the comfort of your home, car, job, etc. Singer/songwriter Phil Wickham does just that on his new album, Singalong 2, which is the follow-up to the popular Singalong, released in 2008.

What makes this project stand out from other live albums is that Wickham released this completely free to the public via his website. He also posted his set list and lyrics prior to the event for people who wanted to attend the concert recording. It was recorded at Calvary Chapel in Costa Mesa, California on March 30th 2012. The songs chosen were off of Wickham's most recent two studio records, Response and Heaven And Earth, with the addition of some familiar hymns.

The 14-track album clocks in at approximately one hour, and flows seamlessly between tracks. Unlike many live records, there is an excellent balance between hearing the audience participation and hearing just Phil perform. The album opens with "Heaven Fall Down" and starts with cheering and clapping from the audience, shortly followed by Phil's acoustic guitar intro. One of the big album highlights is "You're Beautiful;" it also opens with crowd participation as they sing along to Wickham's guitar accompaniment. Another highlight is "Heaven Song," which is one of Wickham's most passionate performances on Singalong 2 and includes piano styling along with his guitar. The album closes with "We Give You All The Glory" and follows a similar styling as the Christmas song, "O Come, All Ye Faithful."

By no stretch of the imagination, this is a worship album, and a very well done one at that. Listeners looking for some new worship music and a few older hymns will be sure to enjoy this album. The only problem that may come up while listening to Singalong 2 is that it can feel a bit redundant during some songs, which may cause some listeners to lose interest about midway through. But the fact that Phil is giving this away for free, you really can't go wrong. Singalong 2 is a wonderful addition for anyone who is looking for great worship music, or just great music in general. Let's hope Phil has plans to release Singalong 3 sometime down the road.