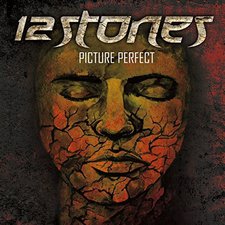 
12 Stones, while not officially a "Christian band," have been a mainstay in the Christian music industry for 15 years now. The veteran rockers have jumped labels a few times, but continue to make solid hard rock that is always an enjoyable listen. The guys are freshly signed to Cleopatra Records and coming off a 5 year break since Beneath the Scars released in 2012. The band has undergone another line-up change since the previous album, but the heart and soul of the group -- Paul McCoy and Eric Weaver -- remains in place. Their newest release, Picture Perfect, continues the trend of 12 Stones making entertaining records.

Paul McCoy's voice enters John Cooper territory on the opening track. Just for the first part of each verse of "The Killer," McCoy's voice sounds a bit like Cooper's -- this was also the case with some tracks on Beneath the Scars -- and, at first glance, almost seems like a duet. "Blessing" is a killer cut and features what 12 Stones does best: a chunky riff, a super catchy hook, soaring vocals, and a blistering guitar solo from Eric Weaver. While the band doesn't change up their formula any, they do however, execute it to perfection. "Nothing to Say" is more of a ballad type song sandwiched in between the funkier sounding "Voodoo Doll" and the harder rocking "Time." While "Nothing to Say" definitely stands out, "Time" is a really good tune with a great change of gears with a bridge that breaks up the song nicely. The latest single (and video) from Picture Perfect is the title track which is another quintessential 12 Stones song that features a head-banging pre-chorus leading into a really big and open chorus. After another rocker in "Save Yourself," 12 Stones channel their inner Jackob Dylan and Wallflowers. "Lerlene" is a love song that is reminiscent of a number like "Fifth Avenue Heartache" and brings back memories of listening to Bringing Down the Horse back in '96 (Who am I kidding?... That album is still in the rotation). The album winds down with three more rockers, with "How Long" and its 3 Doors Down vibe being the best of the three, before finding its official ending with the acoustic track, "Hello Suicide." The closer has a really cool echo-y/reverb/recorded-in-a-hallway sound that gives it a most desperate feel. The album finishes out with the "Picture Perfect Sessions" versions of two Wind-Up releases: "Anthem For the Underdog" and "We Are One." Both tracks are classic 12 Stones rock anthems and have been re-recorded in a much more aggressive fashion. Little tricks that Wind-Up pulled to soften the edges have been removed and each bonus track turns out better than the original.

There are a few bands that I have as "go to" rock bands. These are bands that aren't necessarily innovative, but always manage to release enjoyable records time after time. In that category I include Disciple, Chevelle, and 12 Stones. Picture Perfect isn't breaking new ground or shattering molds, in fact it has 12 Stones firmly planted in their mold, but it's a fun listen from front to back. While songs like "Blessing," "Voodoo Doll," "Picture Perfect," "Lerlene" and "Hello Suicide" prompt multiple listens, nothing on the record really has to be skipped either. 12 Stones have provided another album full of gratifying rocks songs -- some stronger and some a little weaker, but no real duds -- and as always, Eric Weaver's lead guitar is an absolute pleasure to hear. As expected, there are some spiritual overtones interspersed, but McCoy focuses much more on maintaining an overall positive message in his lyrics. Fans of 12 Stones, and rock music in general, should find plenty of enjoyment, even with repeated listens. While Picture Perfect isn't a perfect outing, it is certainly a welcomed return for 12 Stones.

The latest release from 12 Stones, Picture Perfect, is a soundtrack for anyone struggling within a difficult period of life. The first three songs open the record with an angsty, rebellious feel as Paul McCoy sings against someone who is poisoning his life. "Voodoo Doll" is the highlight, using black magic as a metaphor for someone (or something) that can manipulate our lives. With "Nothing to Say," the album turns to climbing out of that difficulty either by seeking help from others or finding the courage to stand (as in "Time" or the title track). "Memphis" marks another shift as the lyrics begin pointing out the problems in our world and challenging the listener to take part in making a difference.

"Hello Suicide" is technically the album closer and it's a dour one. Although containing glimpses of hope, it wrestles with suicide and depression and could easily switch places with the more upbeat "How Long" to make for a stronger ending. The two bonus tracks that end the album, "Anthem for the Underdog" and "We Are One," are new recordings of previous singles. Both fit neatly within the themes of the album, though "We Are One" has a cheesy chorus worthy of a high school cheer. Still, the song is catchy and makes for a more empowering closer.

Overall, this worthy rock album succeeds with spiritually vague lyrics that fit an alternative format, yet still get their point across. The music and words have good variety to them, making for a fun listen. If you're looking for a fist-pumping rock record to pull you through the hot summer months, 12 Stones' latest is picture perfect. - Review date: 7/8/17, written by John Underdown