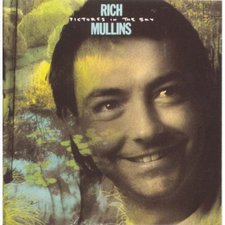 Rich Mullins
Pictures In The Sky

The year after his raw and potential-filled self-titled debut, Rich Mullins was at it again, this time releasing a record entitled Pictures In The Sky. This is the first album that we truly get to hear the sound that became Rich Mullins. Undoubtedly, Mullins learned a lot from his first album, and that comes out in songs like "What Trouble Are Giants" with its fun treatment of the story of David and Goliath, and "Be With You," with its gentile piano and honest, well-written lyrics. And, of course, there is the first appearance of his irresistibly catchy cup-slamming, lap-patting, finger-snapping hit song "Screen Door." Overall, this record is more cohesive, better-produced, and even better-written than his debut--and the quality of his music is leaps and bounds better.

But, Pictures In The Sky still isn't quite the Rich Mullins we know and love yet. There is still that intrusive, era-defining "80's-sound" in many of the tracks, and he has yet to get really creative with his instrumental and musical choices. In addition, you could argue that he overuses background vocals over the course of the entire album. But there is no denying the musical maturity Mullins gained between his first two albums. Almost every song is better constructed and strategically placed. "Love That Knows No Bounds" is among my favorites of his lesser-known works, a chilling and arching track which serves as a perfect closing to the album. It's also very easy to hear the inspiration for his future masterpiece "52:10 Enroit." In fact, the last five songs on the record (which would be the entirety of "Side Two" on a cassette or vinyl release) is so well constructed that it might even rank up with his finest works. That's not to say that the first five tracks just don't work together (because they do), but there isn't anything extraordinary about the first half of the record other than them being five nice songs (two of which became among the top hits of 1987). And, of course, "Verge of a Miracle" became one Mullin's most well-known and inspiring pieces of work.

There's nothing really groundbreaking about Pictures In The Sky, nothing that is a "must-listen" (except maybe "Screen Door"), and nothing that makes it stand out one way or another among his whole body of work, but it is a very accessible album and enjoyable to listen to. Mullins fans and music fans alike will enjoy this album for all that it is worth, but with all due respect, better things are to come...