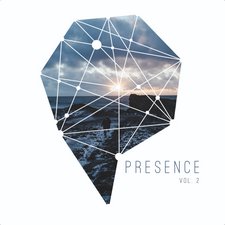 
Techno artist and DJ Andy Hunter has seen tremendous success with songs appearing in movies and video games, but lately he's been flying below the radar working on his Presence app--a free tool designed to help people connect deeper with God through music and the arts. The musical component of the Presence series has a decidedly less club or dance vibe than his previous material, though there are still plenty of tracks that are more upbeat.

Presence, Vol. 2 starts off with "Awe," which is an ambient track with a slow build that sounds like waking up in the morning or watching the sunrise (it would be a good track to wake up to if you want a gentle musical alarm that gets louder over the course of a couple minutes). "Wonder" picks up the pace with a more prominent electronic beat and dynamic synths that fade in and out of the mix. The majority of the tracks fall into one of these two camps of being ambient or steady, with an album highlight found in "Light." When the album is energetic, it's catchy and fun, and where it's quiet, the ambient sounds are pleasant to listen to (although "Beauty" tends to slip by virtually unnoticed with every listen). Unlike his earlier work, there are no lyrical phrases infused into the music here, just electronic instrumentals with occasional choral sounds.

One area Andy Hunter has improved from his previous album is that all of the tracks are tighter, never really feeling too drawn out or too repetitive. With that said, there is nothing here that is groundbreaking, but perhaps that was the intention with its goal of being a tool to draw you deeper into the presence of God. It might not win you over if you are not a fan of electronic instrumental music, but if you liked the recent series of soundtracks Adam Young put out, this will be right up your alley. Taken as a whole, Presence, Vol. 2 serves as a good soundtrack for prayer time / devotionals, as well as working or studying.