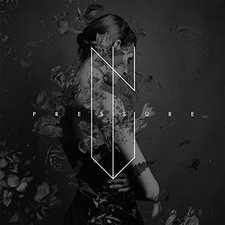 
Last year, Demon Hunter frontman Ryan Clark teamed up with former Project 86 guitarist Randy Torres to form an "electro-rock" duo called NYVES. Their debut album Anxiety released that summer, and while it was a solid album with superb programming from Torres, Clark's vocal delivery sounded a bit monotone at times. This summer, they released a new EP, Pressure, which charted in the Billboard Top 10 Dance/Electronic Albums. Landing in a Billboard top ten list is no small feat, but Pressure doesn't quite hold up as well as one would hope.

While Anxiety incorporated splashes of guitar and piano among the electronic sounds, Pressure is almost completely electronic, and has a much colder, darker soundscape. The opener sounds promising, as the intro to the title track flickers in with symphonic synths leading into industrial beats and reverbed vocals. Clark's vocals are slightly rougher than last time, and his delivery is more direct. However, it is difficult to tell who Clark is addressing as he sings--the chorus suggests he could be talking to God ("Please, for the sake of my revelation / Show me how to begin again"), but the verses appear to indicate otherwise, with lines like "You're the pride before my fall" and "Think you're pulling the strings / But you're leaving me on my own." Regardless of who Clark is addressing, the lack of lyrical clarity can be distracting to the listener. This track ends rather abruptly, and leaves us where it began with those same flickering synths.

Most of the EP follows suit--slow burner tracks, cryptic lyrics, dramatic pauses in the vocal delivery, and musical repetition. Like 'Pressure," "Not Enough" and "Details" also end before they really go anywhere, both lyrically and musically. "Common Ground" begins with a minor key Depeche Mode-esque sound, and as the song progresses it feels as though it will build up to a crescendo...but then it does not, and disappointingly drags on to the end. The highlight of the EP is the middle track, "The Pain," which is the only fast track and has a more complex structure than the other songs.

Pressure is not a bad EP, by any means. Torres' programming and production are still commendable, and Clark does bring more dynamics to the vocals this time around. Unfortunately, the cryptic lyrics, repetitive melodies, and gloomy ambiance make it hard to recommend this EP. Those who enjoy electronica and industrial music may like Pressure, as well as critical listeners who like to analyze poetic lyrics for deeper meanings. The casual listener, however, will be left wanting more.