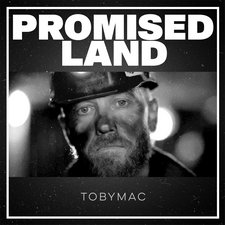 
TobyMac might be the hardest working man in show business. Rarely going a year or two without new music or touring since the late 80's, Mr. Toby McKeehan might rival Rock and Roll Hall Of Famer, and Rolling Stones lead singer, Mic Jagger in the "work ethic" department. And in the last few months and years, TobyMac has rolled out a series of singles, live albums and demo projects that show that there is plenty still in the tank for this music veteran.

His latest single, which he penned with Stellar Kart/Audio A alum Adam Agee, is the soulful and poignant "Promised Land," which finds the fiery showman showcasing a new side of him after all these years, a sincere vulnerability. Set against a melodic bass guitar line (reminiscent of U2's classic "40"), TobyMac builds a case that the last few years have really taken their toll on him (for many obvious reasons), but his hope is not in having an easy life, or a "promised land" down here: "Out here on this desert road / It's hot as fire but I've grown cold / Circlin' like a plane that never lands / And even though the questions change / The answers always stay the same / Maybe someday I will understand / So I'm wonderin' / Got me wonderin' / Where's my promised land?" Then, towards the end of the song, TobyMac's perspective on a "promised land" changes from a physical place, or state of mind, to the comfort that the Lord promises to bring in the midst of the storm: "I won't give up on this race / Broken but I still have faith / That this old life is part of a plan / And I can feel it in my soul / One day, I'll stand before the throne / With nothin' left but hope and these two hands / Through all these seasons / I'm still believin' / You're my promised land / In all my grievin' / I'm still believin' / You're my promised land."

With an honest, plainspoken delivery, and with only a hint of a triumphal ending, "Promised Land" flies in the face of most Prosperity Gospel-type teachings, and wisely insinuates that not every challenge or hard time down here will have a traditional happy ending. But TobyMac rightly states that "through the seasons" of life, the Lord is the sustainer, and His presence is the "promised land". The single is a new side of this music veteran and a refreshing bit of honesty in Christian music.