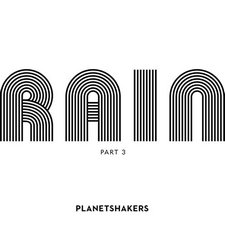 
Dwayne "The Rock" Johnson has been quoted as saying "Success isn't always about greatness. It's about consistency." If this proposition is, indeed, true, then the members of Planetshakers may well be in the running for contemporary worship music's most successful artists. Since 2017, the Melbourne Australia-based outfit has set forth virtually all of their music in doses of a half-dozen cuts or less, pausing only occasionally to put out a full album's worth of material compiled from two or more of the individual EPs.

This firmly-established pattern once again holds for the current undertaking, Rain Pt 3. As it turns out, the third extended player in the Rain series isn't appreciably different from either of the first two installments - or, for that matter, any of the band's other projects released during the past half-decade or so. With stimulating EDM numbers like "Fall on Me" slotted alongside the sunny mid-tempo dance-pop of "My Reason" and meditative, group-sung worship ballads such as "Rain Your Glory Down" and "God Is On the Throne," the new offering travels in a decidedly straight line from that which came before it.

Its similarities to its forerunners notwithstanding, the final chapter in the Rain set is nonetheless the strongest. The previous two EPs were, for the most part, given over to compositions that were agreeable, but ultimately unmemorable. This time around, though, the songs leave a slightly more lasting impression, owing to their stronger melodic content. This is especially an asset on the ballads, whose seven-plus minute durations allow their engaging and worshipful grooves to develop slowly and naturally, rather than coming across as either forced or long in the tooth, as was sometimes the case with the last pair of efforts.

Of course, any such relative plusses and minuses will probably seem all but moot to true Planetshakers diehards, who likely own most, if not all, of the group's back catalog and will likely scoop up the latest project the day it drops. More casual listeners may want to either roll the dice on the full-up Rain release (which includes all of the songs from the three mini-albums) or hand assemble what will be a pretty solid playlist using the strongest tracks from this EP and its two predecessors.