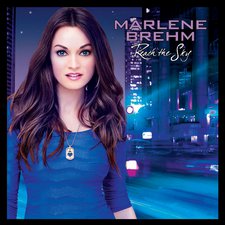 Moving to California to pursue a career in acting and music, Marlene Brehm landed some bit parts in shows like Without a Trace and 8 Rules for Dating My Teenage Daughter. Hot on the trail to produce with Grammy-winning producing teams, she turned to Dream Records for her musical debut, Reach the Sky. Even with renewed attention for serving God through her music, however, her first published result is lacking in almost every area, even down to the overtly Photoshopped cover artwork.

As a general rule, Reach the Sky features a garden variety of pop music with obvious influence from artists such as Kelly Clarkson, Christina Aguilera, and Jordin Sparks, but unlike these powerhouses, Brehm has yet to find her niche in the genre. While there's undeniable variety throughout the record, none of the styles here really strike a chord in making each song her own, and the album feels like a muddled mix of saccharine-soaked melodies that do little to satisfy. For example, "Only You," the album's first single, lingers on the simple message of the Lord omnipresence, but the catchy synth beats with sparse electric guitar licks feel more like the standard pop song than a true artistic statement. In the same vein of recent pop records from Holly Starr or Rachel Chan, Reach the Sky has an unauthentic feel that merely feels like Christian-y themes laid on top of an unaccomplished sound, and that's only a regrettable result that Brehm assuredly doesn't intend.

Even though Reach the Sky doesn't really work well as a total product, there's some thought-through songwriting that shows some promise for Brehm's overall approach. "Second Chances" was written about hope to those previously caught in human trafficking, while "Be There For Me" looks into the lives who depend on Christ's power to move (a soldier leaving his family for the battlegrounds, a family with a foreclosed home). These are the kind of themes that do make good subjects for songs, but it only grazes the surface of their potential, and this leads to a forgettable quality that doesn't do the artist's talent justice. But the least commendable track is "Beautiful Life," which closes out Reach the Sky with reminiscing about God's perfect plan for her life. While Brehm touches this topic with reverence ("since the moment I began, You've been moving mountains/and no one knows what I need more than You"), the song falls into some idealistic holes that aren't rooted in biblical truth ("Now I know that perfect love is out there, 'cause I found it in Your grace/and I know You'll send the one You've planned forever to be mine/and it's gonna be a beautiful life"). While believers should be in constant prayer about their future spouse to make a wise decision about marriage, there is no one "perfect" person, or "soul mate," out there for anyone. And because there is no "perfect love" on the human level, any marriage requires hard work and unconditional love to thrive.

Reach the Sky shows Marlene Brehm crafting a record dedicated solely to her love for Christ, and her Dream Records debut is full of good intentions that listeners shouldn't disregard. That being said, Reach the Sky's delivery is musically and lyrically average at best, and most material, save for "Beautiful Life," was worth a far better execution. With other much more interesting and accomplished pop efforts more worthy of attention, one can pass up Brehm's Reach the Sky without much trouble.