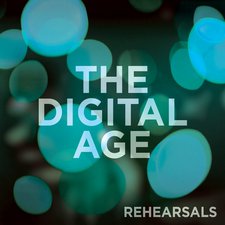 When The Digital Age became its own entity, the first thing the band did was release videos on YouTube, followed by the audio versions of those songs in what they called Rehearsals, Vol. 1. After signing with Fair Trade Services and releasing their well-received debut album, Evening:Morning, the band went back to old habits. The guys are ending 2014 with a new collection of material (although mostly covers) with their own spin. And Rehearsals, Vol. 2 makes for some good worship moments, and a little musical enjoyment as well.

The Jeremy Riddle-penned "Fall Afresh" starts things off, with The Digital Age stepping it up quite significantly. It's a lot more upbeat, with more layers of instrumentation to back it up than the original version, and it's one of the strongest of the six songs here, though it still retains the radio-friendliness to which they're rather prone. They bring in their folky roots next for a cover of the old hymn "Blessed Assurance." Also a lot more upbeat, the music reminds me of something you might have otherwise gotten from Mumford & Sons, though the faster pace with the vocal melody takes away a little of the impact of the lyrics. I like the idea, just not the implementation. "All Rise (Jesus Majesty)," despite having a song title like something Chris Tomlin would come up with, is actually the only song on Rehearsals, Vol. 2 that The Digital Age had a hand in writing (although it was co-written with Jason Ingram). A wonderful cover of the hymn "It Is Well With My Soul" follows (shortened to "It Is Well" for this EP). The pace is slightly picked up without losing any of the reverence associated with it. My favorite part of this song is the final verse; the first half of this verse is sung with minimal instrumentation, as Mike Dodson sings "And Lord haste the day when my faith shall be sight, the clouds be rolled back as a scroll," and then the music picks up and crescendos for the triumphant second half (using the original final line of the song), "The trump shall resound and the Lord shall descend, a song in the night, oh my soul."

Arguably, the strongest offerings are left for last. The Digital Age tackles the song "Oceans (Where Feet May Fail)," originally from Hillsong United's best album, Zion. The song has been everywhere lately (it's almost like the current "Mighty To Save"), and though the song never really stood out all that much to me from Zion, it is a very powerful song, dealing with the idea of trusting God when He calls you to something uncomfortable or seemingly dangerous (sort of like when Peter walked out of the boat in the middle of a raging storm to walk on the water toward Jesus). The Digital Age's rendition of the song is terrific, albeit slightly too long, reaching almost seven minutes. Regardless, it's easy to get lost in the beauty of the track (and, to be fair, the original version from United was only slightly longer). My favorite track comes at the very end, though. "Take Me Home" is a hymn-like song written by a local artist in The Digital Age's hometown of Waco, TX, and the folky sound complements the lyrical style perfectly. The melody and also the choice of words to describe the songwriter's weary life and desire to finally go home is a classic example of folk music, and The Digital Age does well in this arena.

I love the idea of the Rehearsals EPs, and I really hope this is something that The Digital Age is planning on continuing into the future. It's really nice to hear their touch on these familiar (or otherwise) tunes. Though it's not without its flaws or things I would've preferred to hear differently, Rehearsals, Vol. 2 is a nice little treat from the seasoned band, and there's not a lot of reason to not check it out. If you can find a reason, at least give their versions of "Oceans" and "Take Me Home" a listen; I doubt you'll regret it.

Rehearsals V2 continues to distinguish The Digital Age from its legendary past. With two reimagined hymns, two covers of contemporary worship songs, and two new recordings, these live sessions provide a unique worship experience with their experimental musical palette and powerful lyrics. Sadly, the band falls short in the vocal category, ultimately hindering that experience a bit. Lyrically, the hymns and contemporary covers are remarkable, all four of which are balanced between rich theological content and suitability for corporate worship. Musically, this album finds its roots in experimental rock with a good amount of electronics thrown in. There are a few odd moments on the album that work surprisingly well, like the screeching guitar solo on "It Is Well," the dub-step sounds at the 1:45 mark on "Fall Afresh," and the overall country flavor of "Take Me Home." Mike Dodson, the primary of two singers, has a deep voice that helps create a grounded and authentic environment on the songs "Fall Afresh" and "It Is Well," but for the most part his vocals are the weakest link. Additionally, on "Oceans," Mark Waldrop's heavy autotune and yelling steal the intimacy of the original Hillsong version. Rehearsals V2 may only have six songs, but it clocks in at 32 minutes which is fairly generous for an EP. If you can get past the vocals, then you will find a lot to love with the latest offering from this talented *band. - Review date: 11/15/14, Christopher Smith