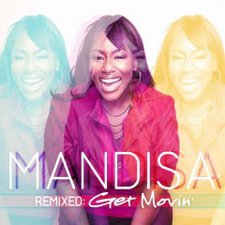 When people hear the name Mandisa, some think of her time on American Idol. Others recognize her as one of the greatest female CCM artists in pop music. However you know her, Mandisa is undoubtedly a gifted singer, and her first remix EP, Get Movin', has a chance to present her incredible voice over electronic music for a change. Listening to five fan favorite singles by Mandisa with new beats underneath sounds intriguing at first, but certain fans may feel this EP lacking when they hear old favorites sped up to match the new music underneath.

The clear star on this track listing is "Good Morning (Capital Kings Remix)." Right off the bat, a great Mandisa song meets Capital Kings' incredible beats and synthesized soundscape. While unparalleled music is expected from these remixers, this song is easily one of the best works you'll hear from Capital Kings; with amazing techno leads and an ecstatic party-sounding chorus, this version feels more like a morning wake-up than the original. The second track takes a different course. While not entirely a bad song, "Stronger (Movin' Remix)" is basically a simple (but still beautiful) electric piano pattern played in a few different ways over the course of the song and overlayed with percussion rhythms. Even though this track proves an interesting new spin on one of Mandisa's best, criticism may be called on its simplified musicality and sped up tempo that messes with the vocals to a point where some may find it annoying.

An older song earns a remake in "Only the World (Switch Remix)," and this one ends up sounding like a cross between the first two tracks. The new dubstep-type sound works pretty well with the song and isn't too simple by any means, but fans may cringe just a bit at the quicker vocal tracks. "Shackles (Switch Remix)" falls along the same lines: while the updated techno-pop sound is a welcome addition, the sped up voice of Mandisa, like most voices, doesn't sound as high-quality as when originally recorded. The EP ends on a higher note, however, with "My Deliverer (RawlsCO Latin Remix)." While the overall style doesn't shift entirely, this song definitely has a more dance-worthy pop feel than the original single. Thankfully, the tempo was adjusted just slightly enough that it is hardly noticeable.

Mandisa's first remix project was not an utter failure like some end up being, but it was not entirely a success either. Most of the songs on Remixed: Get Movin' sound incredible when new electronic music was placed underneath Mandisa's signature vocals. The real big catch in this endeavor was when Mandisa's naturally impressive voice took a slight dip in quality as the tempo took a slight jump upwards. While this is often a great tactic used by many DJs and other music mixers, this serves as a reminder that sometimes too much is... well, too much. Nevertheless, I would still recommend this to any Mandisa fan or CCM listener: great music, even if remixed into a slightly lesser form, deserves to be listened to, especially when the messages are positive and uplifting.