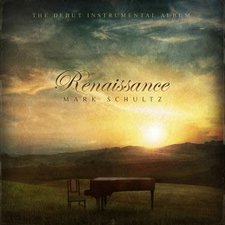 Take one large part Michael W. Smith, Freedom era, one part Jim Brickman on a very good day, toss in just a pinch of George Winston, and you've got Mark Schultz's Renaissance. Inspired by a trip to Europe, this project was conceived, birthed, and largely recorded in Florence, Italy. The finished product plays like a little string of musical post-cards. And what lovely post-cards they are.

The "Highlands" beckon with all the right pipes and whistles. The "Road to Girona" is joyful and full of promise. "Normandy" swells with solemn patriotic pride. "Snow in Paris" is quietly magical. The "Cathedrals" rise majestically. "Leaving Florence" is bittersweet. But at the end of the journey, "Coming Home" plays like a landing plane and a car rolling into a familiar driveway, to the tune of a romping piano and B-3 Hammond.

The title aside, there isn't anything authentically Renaissance-sounding about the project, so if you were looking for medieval lutes and lyres, you'll be disappointed; this is straightforward orchestrated pop. As mentioned earlier, it bears many resemblances to Michael W. Smith's instrumental project, Freedom. One could take a number of the tracks on Renaissance and simply pair them up with similar tracks on Freedom (e.g. "Normandy" and "Freedom," "Leaving Florence" and "The Giving," etc). The main difference between the two albums is that Renaissance is a little less epic, a little more focused on the piano. In fact, it never uses a full orchestra. However, many of the pieces would still feel right at home in a movie soundtrack.

If I could point out a weakness of the project, it would be that a few of the pieces sound over-produced -- "too Nashville," if you will. This can be a bit of a distraction in the midst of what is mostly a very lush, mellow album. "Off the Map" is a particularly odd track, jerking from peaceful piano to heavy drums and ominous strings to electric guitar angst and back to peaceful piano again. "Letters" is lovely, but, again, could have been better without the whole "works." Simply keeping it stripped down to the piano like "Road to Girona" would have improved it greatly. Speaking of "Road to Girona," it is without question my favorite track on the project. It's the dash of George Winston in the mix --a strikingly gorgeous piece that will send you careening to the piano to pick it out for yourself (if you're like me anyway).

Another small complaint is that the liner notes don't indicate which tracks actually feature Mark's piano playing and not another studio musician (he shared the load with Jason Webb and Bob Cooper). Fun tidbit: All the piano was recorded at St. Mark's Church in Florence.

But there is, really, not much to complain about on Renaissance. Fans of Mark will obviously snap this up, but this is good music that deserves a spin even for casual fans. You've heard the singer/songwriter side of Mark Schultz for the last decade. Now he unveils a new side: composer.