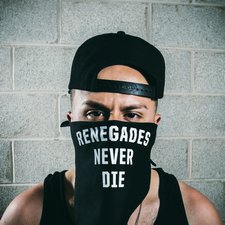 Prolific beat boxing extraordinaire Skrip has been in the hip hop music scene for over a decade now, and Renegades Never Die is his latest release. The Chicago native is dropping this album courtesy of Infiltrate Music and is certain to garner some attention with this release. The first two tracks "iDOLS" and "Go On" feature some stellar production and are sure to make hip hop fans nod their heads. The next set of tracks includes "Este Fuego," (meaning "this fire") and "When The Beat Drop" - nice dance tracks that are made to be blasted in clubs everywhere. At this point, there is nothing skip-worthy or bad, but there's also nothing overly attention grabbing either.

The best tracks on Renegades Never Die are found toward the latter half of the album. "A Better Way" is a great story-telling track about lustful failures in life, and Eden Myrrh's chorus is on point. Up next is "Memorandum," featuring Social Club, which is full of hot beats and tight spit verses, while "LWYMMD" showcases Skrip's spitting potential nicely. These are the only tracks I couldn't help going back to and listening to over and over again.

On the negative side, Skrip tends to be unique, which can be hard to balance. Sometimes his creativity isn't something I enjoy hearing, with the verses of "Right Now" and the chorus in "Heir In The Air" as good examples of that. However, uniqueness can also turn out to be something amazing if you find that perfect balance. As said, there's not much that's not good here; they're just not necessarily stellar songs, either.

If you're into hip hop, you may want to give this Skrip's Renegades Never Die a listen, but if you pass, you are not missing out on too much either.

Two years ago, we were introduced to a brand new independent record label called Infiltrate Music and its first signee, Skrip. Skrip's 2013 album The Und_rscore II was a solid introduction to the artist's style, and it earned him a place on my list of artists to keep up with. Needless to say, I was excited when he and Infiltrate announced a new album in the works. Unfortunately, Renegades Never Die fails to live up to the hype. There are some solid tracks, like the Alex Clare-ish "Tonight," and "Memorandum," which features guest verses from indie superstars Social Club. For the most part, though, I find myself skipping over track after track in search of the good stuff. Renegades Never Die finds itself imitating a lot of other urban/hip hop artists; whether it's Lecrae, The Black Eyed Peas, or Flo Rida, it just sounds like somebody else's work for nearly the whole album. Even guest singer Adrian Quintana (in "Heir in the Air") sounds a little like Rihanna. In addition, I found myself being annoyed here and there, like with the hooks of "Esta Fuego" and the aforementioned "Heir in the Air." I'm a fan of Skrip, and I'm still planning on keeping up with his future work, but ultimately, Renegades Never Die is an album I most likely won't end up revisiting or recommending to anyone looking for a good hip hop album. - Review date: 2/15/15, Scott Fryberger