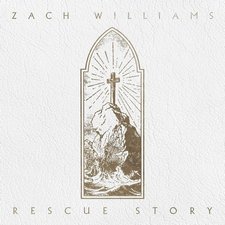 
Following up a successful debut album is one of the most daunting tasks in all of popular art. You only have one album to compare the new material with, and a very short runway with which to satisfy the fans won over with the first batch of material. Thankfully, southern blue collar rocker Zach Williams doesn't seem to feel any pressure on Rescue Story, the follow-up to his massively successful debut, Chain Breaker. That album contained the kind of massively likable and wide-ranging songs that draw fans from across the spectrum (particularly that now-iconic title track), and presents a high bar for William's sophomore album to clear.

And for the most part, Rescue Story delivers, with the same sort of southern grit and gothic atmosphere that Williams and his band have no doubt been steeped in. The opening, "Walk With You," is a slow-burn of a tune, with a soft piano and acoustic guitar intro that stretches out over a minute or so, building to a drum crescendo and extended guitar solo with a fantastic, intense vocal from Williams. Weaving travel imagery throughout, the song builds wonderfully, and feels like a cinematic journey with Williams singing "The road less traveled / Has it's battles / But there's no battle / Oh, that You won't pull me through / In this 'running with the devil world' / I'm gonna walk with You".

The old-timey, swinging "A Little Less Like Me" feels like a call back to "Old Church Choir" from Chain Breaker, but still distinguishes itself as a rousing anthem with great instrumentation (including some epic electric guitar / Hammond B3 organ interplay) and memorable lyrical wordplay about growing in your faith, and looking like Jesus in real life. The following title track (and first single) has a slow build into an epic tune with another vocal chord-shredding performance from Williams.

"Give Him Praise" is a groovy, horn-drenched affair that, in another artists' hands, would seem hackneyed and cloying. But Williams and his band have an obvious love and respect for southern soul music, and this lighter tune serves as a breather for when things turn darker in the next few songs. With "Slave To Nothing" and "Under My Feet," Williams goes after the darker themes of spirituality, and when he tells the devil to "get on back to hell" in the later song, it feels like a genuine moment and not a casual mocking or making light of the spiritually dark forces.

"There Was Jesus" features American music icon Dolly Pardon, and it's to both artists' credit that the song stays Jesus-focused, with both Williams and Pardon turning in restrained performances that honor the subject of the song. With "Baptized" and "Face To Face," Williams closes out the album with two traditional sounding southern gospel hymns that wouldn't be out of place in that old, white, wooden church in your town.

Rescue Story may not be as stacked with hit singles as Williams' debut album, but he and his band deliver with each track, and perform the neat trick of reminding fans what they liked about the first album, while showing growth and maturity in their craft. Rescue Story is a very good southern rock album (with shades of classic rockers like Bob Seger or modern soul artists, like Nathaniel Ratliff & The Night Sweats), full of both grit and tunefulness, and a continued treatise on the gospel, and its freeing power for those in chains.

With his sophomore album, Rescue Story, Zach Williams tweaked the sound from breakout debut, infusing more gospel and a dash of country into his brand of southern rock. It's encouraging that Williams is actively avoiding common sounds of the CCM industry, but at the same time the execution and lyrics here seem a bit one-dimensional. That said, Williams' rich, gruff voice largely makes up for this slight setback. Those that are looking for something a little different in CCM should give Rescue Story a listen. - 10/16/19 Christopher Smith