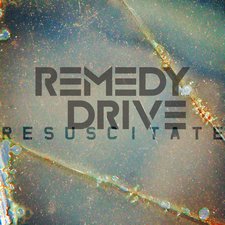 I won't lie. Sometimes when we album reviewers listen to so many albums back-to-back that sound so alike it can be easy to become weary, if not cynical, when it comes to writing and slapping a review on an artist's labors. So when a band of four brothers named Remedy Drive appeared on the scene with such lush piano pop rock music and heartfelt lyrics, many of us received their debut, Daylight is Coming, like the vibrant beam of light it was (pun intended). But, four years and two EPs later, the group is back with their much-anticipated sophomore album, Resuscitate.

The group's lineup has changed some since their last full-length as lead singer David Zach is the last remaining family member of the band. However, the change in personnel doesn't impact Remedy Drive's familiar pop rock sound they established in 2008. The piano plays a key role in the opener, "Better Than Life" which sounds exactly like it belongs on Daylight Is Coming. The next track, "Lost Cause," provides a catchy, if not infectious, pop rock tune that's an easy highlight. Their heavier song, "Resuscitate Me" features muffled guitars and vocals that are too reminiscent of Switchfoot's "Mess Of Me" and "Afterlife." Although the production of the title track and the rockier "Make It Bright" is sharper than the rock fused tracks on their debut, the extra raw energy of "Something Made To Last" and "What Happens (At The End)" is unmatched here. The first time I spent glazing through Resuscitate, "God I Hope So" instantly caught my attention with the perfect touch of the piano and David's emotional voice guiding the ballad.

However, much of the goodness showcased in the first selection of songs isn't translated to the rest of the album. It almost seems that band let up on the gas pedal ever so slightly, and it shows. While much of the rest of the album is mechanically sound, several pop rock songs ("What Are We Waiting For" and "Glory") are just not ambitious enough when compared to the tracks that filled their first project. The refrains especially leave something to be desired. Also, while the lengthy ballad "Crystal Sea" is solid all around, it's not as gripping as "God I Hope So."

Lyrically, the band has a lot of hope to offer, especially to those who have taken a spill or two along life's road. Several tunes on the release ("Lost Cause," "Resuscitate Me," "Don't Forget," and "Hold On") focus on the singer's brokenness and need for redemption. On those songs, the source of the redemption is clearly Christ which is echoed on "Glory" ("Glory/Let it be an anthem for the King"). Strangely enough, some of the lyrics on the chorus of "Lost Cause" ("I'm not a lost cause") are completely reiterated on the very next song ("I'm not a lost cause").

Musically, I've spent a bit of time here comparing Resuscitate to Daylight Is Coming. Even after the first spin, it's obvious that the debut is superior in most respects and Resuscitate qualifies perfectly for the supposed "sophomore slump," which is unfortunate since it took Remedy Drive four years to get here. However, albums must stand on their own, and, although it isn't quite the breath of fresh air Daylight Is Coming was, Resuscitate qualifies as a solid pop rock project with enough highlights to get by.

To say Remedy Drive has had to overcome some serious obstacles over the last two years would probably be an understatement, but now four years, two EPs, and a new label after their Word Records debut, the band presents their sophomore album, Resuscitate. With everything new in place except for vocalist David Zach, one might expect Remedy Drive to sound entirely different, but Resuscitate retains the heart and soul of the band through Zach's hopeful lyrics and unique vocals. However, a quick listen to the album may disappoint some fans who enjoyed the somewhat more raw sound the jam band had brought to the piano pop rock table with Daylight Is Coming (Which, honestly, I thought could have even used a little less polish then). But further listens to Resuscitate's more shiny packaging reveal the gems within. The opener "Better Than Life" doesn't pack the punch that "Stand Up" did for the previous album (or even "Light Makes A Way" did for that EP), but "Lost Cause" is a highlight that just takes the baton and sprints for the finish line. "Resuscitate Me" bears an edge we've not yet heard from the band that only pops up again in "Make It Bright," while the rest of the album seems to hold back a bit, residing comfortably within that piano pop rock sound the band has become known for. And while each song has something redeemable and memorable about it, it's tracks like the heartbreaking "God I Hope So," the anthemic reminder of who we are in Christ "Don't Forget," the worshipful "Glory" and the hopeful "Hold On" that prove to be the album's other bright moments. As a pop rock record, Resuscitate is among some of the best of the year, while those maybe hoping to find a little more of the raw energy of their live show captured on this record might be a little disappointed. Regardless, Resuscitate remains a strong batch of songs from a band that I can expect only bigger things from in the near future as they continue to rediscover their proverbial footing as this new foursome. - John DiBiase, 9/17/12