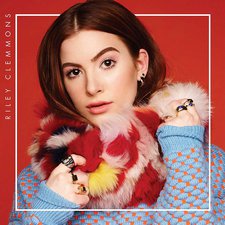 
While the notion of musical perfection is, by its very nature, an inherently subjective and hard-to-define quantity, a track like "Hold On" makes a pretty strong case for being labeled as the ideal pop song. To be sure, given its infectious finger-snapped percussion, slowly-building groove, joy-filled chorus and decidedly encouraging lyrics - all topped off with some of the most sparkling, razor-sharp vocals in recent memory - one would be hard-pressed to concoct a more fetching sure-fire Top 10 entry than this one. Fortunately for 18-year-old Riley Clemmons, the sterling composition bears her name in the co-writer's slot and makes its home on her self-titled debut outing, kicking off the first of its twelve cuts with both energy and aplomb.

Hardly the only bright spot in the running order, the remainder of her eponymous effort is blessed with no shortage of top-rank material to make good on the momentum generated by the opening track. "Saving Me" catches the talented teen pumping up the funk quotient in superlative fashion. The lilting "Running After You" proves that pacing and restraint can be every bit as appealing as all-out, non-stop vocal acrobatics. And the insistent electronic volume swells found on "Remember" lend the mesmerizing, almost robotic-sounding piece a uniquely appealing character that sounds very little like anything currently playing on Christian pop radio.

Clemmons exhibits a similar mastery on her slower material. The sublimely convincing quiet storm number, "Remember," finds her laying out her treatise on true identity with quiet, understated confidence rather than resorting to cloying or bluster. The equally impressive "Broke" is infused with a languishing, soulful aesthetic that draws a straight line from classic torch singers like Etta James and Billie Holiday to present-day praise and worship powerhouses such as Lauren Daigle and Kari Jobe. And the gut-level honesty that filters through the album-ending acoustic version of "Broken Prayers" ("You're not afraid of all the things I feel/ Don't have to hide the scars that still aren't healed") only serves to render the already beautiful piano ballad all the more poignant.

The record isn't entirely without the occasional misstep. The rhythms and melodies of "Drop Everything" and "You First" tend to veer a bit toward the generic. "I'll Stay" is similarly weighed down by Clemmons' slightly over-the-top delivery. Those shortfalls notwithstanding, the few lesser entries are easily excised by a bit of judicious editing. And Clemmons delivers the lion's share of her vocals in a manner that elevates, rather than overshadows, the instrumental portion of her songs. If the notion of the dreaded sophomore slump is to be believed, Clemmons certainly has her work cut out for her when it comes to matching the imposing high-water mark laid out by her remarkable inaugural album. For now, though, fans of uplifting, expertly-constructed pop should toss aside all thoughts of the future, pick up her freshman release and simply lay back and bask in the irresistible glow of one of this year's most impressive projects.