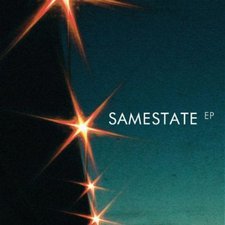 Hailing from the Kansas City area, relative musical newcomers Samestate have made tremendous headway since the group first came together a couple of years ago. They have already toured with well-known bands such as Hawk Nelson, Fireflight and Superchick, and have landed a record deal on the EMI CMG label with a full-length album, The Alignment, due out in early 2012. Those are noteworthy achievements for a young band in an industry that is overstocked with talented musicians.

The feature song, "Hurricane," from their major label debut EP is receiving airplay on Christian radio stations such as Air1. This four-song EP is ostensibly to provide potential fans with an advance taste of their music until the full-length album is released. The fact that the EP only contains four songs that will also be included in the upcoming full-length record probably doesn't do the band any favors. It is unlikely that fans will want to purchase the EP and then purchase the full-length release a few months later with much of the same music on the record.

The Samestate EP has a nice guitar and piano-driven sound, although lyrically the songs don't contain a tremendous amount of depth. While the band's spiritual focus is evident in their music, there is definitely room for improvement here, but, then again, this is a young band that should continue to mature in their writing over time. Lead singer Dalton Diehl's voice is, in a word, interesting. His vocals are clear, but a bit twangy. Hopefully, his singing style will continue to improve as well. It's also interesting that "Hurricane" is the featured song on the EP, because arguably both "Wake Me Up" and "Not Your Fight" (which is the only track that won't be on The Alignment) are better songs, both lyrically and musically.

Overall, the band's sound should appeal to a fairly large alternative rock audience within the Christian genre. Fans may want to wait for the full-length album in order to get the full picture of what this group is really about. It will be interesting to see how the album is received. If the next couple of years are anything like their first couple, it should be an enjoyable and fast ride for this band from the heartland.