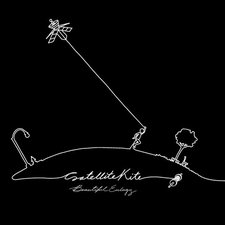 It's been about five months since we've gotten anything new from the Humble Beast crew (Theory Hazit's banger, Thr3e), but over the past couple of months, we've been hearing a lot about the newly-formed trio called Beautiful Eulogy. The trio consists of current Humble Beast emcees Braille and Odd Thomas and producer Courtland Urbano (formerly known as Xperiment). The crew has been hyped up by people who've seen them perform live, and their first collective album, Satellite Kite, lives up to it.

Satellite Kite is an interesting set of hip hop tracks. For the most part, the beats are pretty laid back, with a lot of down-tempo times. Urbano has a unique style unmatched by anyone else that I can think of (except maybe Trent Reznor from Nine Inch Nails). The beats have an industrial flair that hip hop heads don't hear too often. The majority of Beautiful Eulogy's offering follows this pattern, but each track is its own at the same time. If you've listened to Braille's previous album, Native Lungs, you know that there were some real heavy-hitting beats; don't expect that from Beautiful Eulogy. Urbano creates something truly excellent without really going anywhere near the "blasting out of your car window" style. "An Open Letter To Whoever's Listening" has some quiet music in the background that gets a little close to gangster rap, but the actual beat itself doesn't quite let the track get there.

If you're a Christian hip hop fan, chances are you heard Odd Thomas and Braille (as Beautiful Eulogy) rap on the track "Misconceptions" from Lecrae's Church Clothes mixtape (which, in my opinion, is the best track on the mixtape), and you have an idea of how well the two work together as a rap team. They're always on the same page (although sometimes at different tempos), and their flows are rather seamless. You may have seen the video for the album's first single, "Entitlement"; the two switch back and forth on the mic multiple times, a lot of times even sharing bars. One of my favorite tracks is the upbeat "Motive 1, 2," which seems to be about people wanting to be friends with the guys just to say they have famous friends (and it sounds like a true story). I love the beat, but lyrically speaking, it's on fire. While both emcees spit quickly, Odd Thomas' flow is such that I can't figure out when he's breathing. He just keeps going without stumbling while only taking one or two noticeable breaths. I'm not sure how he does it, other than years of doing it. The quick flows are also present in the terrific track "Take It Easy." Quick flows are not the only thing that define how good an emcee is (it's true), but these examples from Satellite Kite are still extremely impressive.

Whether they're rapping fast or not, they've always got something good to say. Braille speaks about the good that can be found in hard times in the song "Anchor." He says, "Evil intentions will not disturb God's purposes or interfere, so who shall I fear if my anchor is secure? Learning to consider it pure joy when I'm facing tribulations, praising God instead of complaining and getting overtaking with bitterness, looking at the pages of the Book of James and seeing the ways that God works through the trials to make us more mature in our faith." He's joined shortly after by singer/songwriter Josh Garrels, who sings in the chorus about God being the anchor of our souls during the storms of life. And speaking of guest vocalists, Catalina Bellizzi (who I was first introduced to in last year's EP from Alert, Red Opus .45) sweetly sings about the love of God. Also, as Humble Beast artists always stick together, we get a verse from newcomer to the label Lee Green, who joins the soulful "Surrender," and provides a style of rap closer to something you'd hear from Thi'sl or Tedashii. It fits the sound perfectly, and makes me eagerly anticipate his first release with the label. Finally, we hear a spoken word piece from Propaganda in "Wonderful," bringing to mind Prop's verse earlier this year in Theory Hazit's album Thr3e (although it's different thematically and lyrically). There are few poets out there right now who can put the most wondrous aspects of God into such beautiful words the way that Propaganda can, "All but left with no breath and awestruck, that's wonderful, this is cause to pause and give thought to it, selah, say y'all never thought about it, but there has never been an identical sunrise, so wonderful, wrapped in jackets of amber and stands with universe in hand and our tears in bottles, He collects them, lined in perfect symmetry across the shelves of the throne room, next to full and accurate account of every electron everywhere and every follicle of hair on our head." His verse is a highlight among the many highlights of this album. (On a side note, look for Propaganda's new album Excellent, hopefully coming this year.)

It's rather amazing how good Satellite Kite is. It's not that I didn't expect it to be good, but a lot of times these days, when an album gets hyped up so much, it more often than not leads to disappointment. The album may be good, but if it's not as good as it's hyped up, it's disappointing. If you've heard anything great about this trio, believe it. Admittedly, Beautiful Eulogy's sound won't appeal to every hip hop fan, but I urge you to at least give it a shot. It's lyrically challenging, musically experimental, and artistically excellent. God's blessed them with incredible talent and they've used it for Satellite Kite. Be sure to pick this one up soon, and enjoy one of the best hip hop albums of the year (and by year's end, I'm confident that it still will be).

- PReview date: 6/12/12, Review date: 6/15/12, written by Scott Fryberger of Jesusfreakhideout.com class="coversize" align=right> Having dropped a couple singles this year and appearing on Lecrae's Church Clothes mixtape, Humble Beast trio Braille, Odd Thomas, and Courtland Urbano are finally primed to release their first record as a collective unit. Beautiful Eulogy's first album, Satellite Kite, is a collection of excellent hip hop that blows away almost all other hip hop albums to have come out this year. Urbano's production is brilliant, with a style of beats that you don't really hear a lot of in today's hip hop scene. Braille and Odd Thomas are at their best, with wisdom and praise stemming from unbreakable flows that just don't stop. In addition, we get guest vocals from Josh Garrels and fellow Humble Beast artists Propaganda and Lee Green. Satellite Kite will be available for free next week, and hip hop fans need to prepare themselves for something outstanding. - PReview date: 6/12/12, written by Scott Fryberger of Jesusfreakhideout.com --->

The Humble Beast trio Beautiful Eulogy have released one of the most relaxed and laid back hip-hop albums you can find with their debut, Satellite Kite. The sounds and beats will not strike one as "normal" for the hip-hop realm, but then again who is to say what's normal? Instead, what the listener gets is an interesting fusion of folk and hip-hop from producer Courtland Urbano. As soft as the background music and beats are for much of the album, the lyrics are as equally hard-hitting and often times come across as poetry more than anything. Rappers Odd Thomas and Braille hold nothing back in claiming Christ as King of kings. Not that either artist's talent level or skills were ever in question, but this newest record absolutely solidifies them as a force to be reckoned with in the world of hip-hop. While the sounds of Satellite Kite won't be for every rap or hip-hop fan, the lyrical flow and message are alone worth a listen. The different sound of the album may even appeal to those who tend to avoid the genre. Do yourself a favor and get over to the Humble Beast website and download this album; you will find yourself enjoying tracks like "Wonderful" and "Motive 1, 2" in no time. - Michael Weaver, 6/25/12